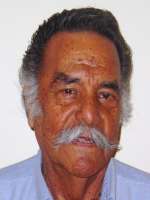 83, passed away peacefully on March 24, 2011 in Phoenix, AZ. Born on January 5, 1928 in Miami, AZ, he is survived by his wife, Dora, his daughters, Laura, Dolores and Rachel, his sons, Gregory and Arthur, 17 grandchildren and 5 great grandchildren. He is also survived by his brother, Humberto and his sister, Yolanda. He is a United States Air Force veteran and City of Phoenix retiree who cherished his family and enjoyed nature and the great outdoors. A Visitation will be held on Wednesday, March 30th at Whitney & Murphy Funeral Home, 4800 E. Indian School Rd., from 4:00 – 8:00 pm with a Rosary at 7:00 pm. A Funeral Mass will be held on Thursday, March 31st at 10:00 am at St. Jerome Catholic Church, 10815 N. 35th Ave., followed by burial at St. Francis Catholic Cemetery.

Offer Hugs From Home Condolence for the family of RENTERIA, PRUDENCIO “LENCHO” B.