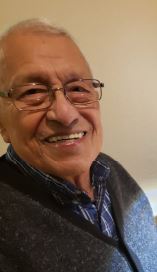 Raul came from a military family serving in the United States Army as a paratrooper in WWII. He graduated from East Los Angeles College with an Associate Arts degree.

Raul was a devout Catholic. He loved going to adoration and to Liturgy. He offered up his sufferings and prayers daily for the conversion of his family back to the Holy Catholic Church. He was a member of the knights of Columbus. He had a devotion to the Sacred Heart of Jesus and kept the First Friday devotions, as well as a love for Our Lady of Fatima and the First Saturdays devotion. Recently he consecrated himself to St Joseph. He prayed several rosaries and chaplets a day for people, and the dying. Although he was not a person of means, his generosity towards Catholic missionaries, and the poor was closest to his heart. Over the years he gave to several Catholic missionaries too many to name.

Raul is survived by his daughter Carol who lovingly cared for him the last four years of his life. He had two grandchildren and great grandchildren. He will be missed by his brothers, Alex, Cervando, his sister Helen, nephews Ron and Paul who knew him as “Uncle Roy.” Raul was preceded in death by his loving parents Manuel and Josephina, his brother Manuel, two sisters Mary and Espie, nieces Theresa, Cathy and a nephew David.

In lieu of flowers and with gratitude his daughter requests masses/Divine Liturgies to be said for the repose of his soul.

Funeral Services will be at:

Offer Hugs From Home Condolence for the family of REYES, RAUL