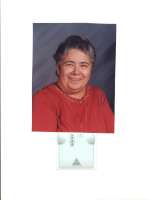 Sister Esther Ann Reyes IBVM, member of the Loreto Sisters’ Religious Community at Ss. Simon and Jude Convent, Phoenix, Arizona died peacefully on Monday, December 5th. Sister Esther will be greatly missed by her Religious Sisters and friends, and, especially, by her immediate family: her sister, Frances Holguin, her sister, Gloria Viramontes, her brother, Frank L. Reyes, and her brother, Oscar Mario Reyes, and by all her dearly beloved nieces, nephews, grand-nieces, and grand-nephews, great grand-nieces/nephews and devoted sisters/brothers in-law. Sister Esther’s pre-deceased immediate family includes her parents: Frank and Ana Reyes and sisters, Margaret and Dolores. Sister Esther’s passion was education.
She demonstrated deep adherence to Catholic principles, great organization and thoroughness in her teaching ministry at Ss. Simon and Jude Catholic School, and also strong leadership when she served as principal of Sacred Heart Catholic School in Prescott. Her leadership skills were also put to use in the years she ably handled the Hispanic Ministries in Ss. Simon and Jude Parish. In the last 10 years she has provided English (ESL) night classes for Spanish-speaking adults at Ss. Simon and Jude Campus, thus broadening the scope for jobs and advancement for all those who attended her classes. Sister has been in all things a faithful servant of The Lord! Visitation will be at 6:00 p.m. on Friday, December 9th, at Ss. Simon and Jude Cathedral, (6351 N. 27th Avenue, Phoenix) followed by Rosary at 7:00 p.m. Funeral Mass will be at 10:00 a.m. on Saturday, December 10th at Ss. Simon and Jude Cathedral. Interment at St. Francis Catholic Cemetery. In lieu of flowers donations may be made to Ss. Simon and Jude Student-scholarship Fund or to Loreto Sisters’ Retirement Fund.

Offer Hugs From Home Condolence for the family of REYES, SR.ESTHER ANN, I.B.V.M.