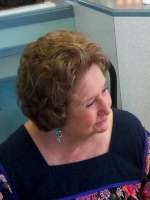 October 12, 1931-July 29, 2010. Helen was born in Tucson to Margaret Pettid Romley and Elias M. Romley while her father was attending the UofA Law School. After his graduation, her parents returned to Phoenix and lived there the remainder of their lives. Helen passed away in Bakersfield, CA. Her parents were born in Phoenix in 1908 and 1909, before Arizona state-hood, and passed away in Phoenix in 1946 and 2001. Her grandparents, on both sides of the family, came to Arizona in the late 1800’s. Helen grew up in the family home at 4900 N. St. Francis Place (now First Street) in Phoenix. Her folks built this home on pasture land, next to St. Francis Church, in the 1930’s. At that time, people asked them “why are you building way out in the country”? Helen graduated from St. Francis Grammar School and Xavier College Preparatory. She attended the UofA and upon graduation, she returned to Phoenix. On August 5, 1954, she married George Eugene Ribble, who was an engineering student at the UofA. She taught school in AZ and CA. Helen and George have lived in Bakersfield most of their lives. Helen is survived by her husband, George (Gene) Ribble and daughter, Beverly Layman. Their son, Arthur, passed away in 1987. In addition, she is survived by their grandchildren, Shelby and Brandon and great-grandchildren, Calen, Jamie and Cadence. Helen was a fun-loving, adventurous lady who loved to travel and play tennis. Family and friends were an important part of her life. Helen will be missed greatly by all who knew her as she was a kind soul. Survivors also include her 4 siblings, Maggie Mikkelson (Eugene), Scottsdale; Barbara Eischeid, Tucson; Mary Anne McKone (Jack), Phoenix; and Arthur Romley, Phoenix. Funeral Service will be held at 10:00 am, Tuesday, August 10th at Whitney & Murphy Funeral Home, 4800 E. Indian School Rd. Interment will follow at St. Francis Catholic Cemetery. In lieu of flowers, the family kindly requests contributions in Helen’s name to Xavier College Preparatory, 4710 North Fifth Street, Phoenix, 85012. Please remember Helen in your prayers.

Offer Hugs From Home Condolence for the family of RIBBLE, HELEN MARIE (ROMLEY)