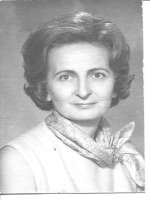 passed away peacefully, at age 86, on September 23, 2010. Marian was born in Scranton, Pennsylvania on May 3, 1924, to Matthew A. Kraynak and Veronica Repasky Kraynak. Marian is predeceased by her loving husband of 60 years, Robert Paul Richmond, whom she met while working in Philadelphia for the Signal Corps during World War II, while Bob was serving in the Navy. During their long marriage, Marian and Bob lived in Baltimore, Maryland; Baton Rouge, Louisiana; Mumbai, India; Singapore; and ultimately Phoenix. Marian had a lifelong love for teaching and the fine arts. She pursued a college degree in mid-life, earning her B.A. from Louisiana State University. She subsequently taught in the East Baton Rouge Parish school system until moving to Arizona. In Singapore Marian was introduced to Ikebana, the Japanese art of flower arranging, and earned her credentials as an instructor in the Sogetsu School. Over the years she passed on her passion for Ikebana to many others and continued to enjoy the beauty and intellectual aspects of this art for the remainder of her life. Marian is survived by her daughters, Barbara Berman (Mike) of Phoenix, and Nancy Ward (John) of Katy, Texas; grandchildren Paul Berman, Steve Berman, Laura Berman, Dan Ward, and Emily Ward; and nieces and nephews Christine Laning, Luci Block, Robin Terry, John Paul Terry, and Richard Terry. Interment will be at the National Memorial Cemetery of Arizona. In lieu of flowers, the family requests donations be made to the Phoenix Art Museum, 1625 N.Central Ave., Phoenix, AZ 85004.

Offer Hugs From Home Condolence for the family of RICHMOND, MARIAN ALICE