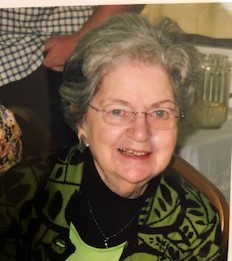 Kathryn A. Ringer, 99, born March 16, 1920, in Paw Paw, MI passed away peacefully on November 21, 2019 in Phoenix, Arizona. Kay was a woman of many talents. She worked in a truck transmission factory during WWII and moved to California after the war while working for the phone company. She met her husband-to-be in Berkley, CA, where they were married and then relocated to Phoenix, AZ in 1954. She began raising a family and had three children, Kevin (Christine), Mark (Ann) and Leslie (Donna); two grandchildren, Matthew (Brooke) and Megan (David); and five great grandchildren Kathryn, Skyler, Keiran, Soren and Declan. After having her time as housewife and mother she went back to work as an educational secretary for the Creighton School District from which she retired. Her hobbies included playing bridge, sewing and providing cookies and guidance to a neighborhood full of boys.
Visitation will be held from 6:00 – 8:00 PM, Wednesday, December 4, 2019 with a Rosary at 7:00 PM at Whitney & Murphy Funeral Home, 4800 E. Indian School Rd., Phoenix. Funeral Mass will be celebrated at 10:30 AM, Thursday, December 5, 2019 at St. Thomas the Apostle Catholic Church, 2312 E. Campbell Ave., Phoenix. Interment at St. Francis Cemetery, 2033 N. 48th St., Phoenix. A gathering will take place at Whitney & Murphy Funeral Home after interment. Family suggests donations to the St Vincent de Paul Society, P.O. Box 13600, Phoenix, AZ 85002, or at https://www.stvincentdepaul.net/give
Condolences may be expressed at www.whitneymurphyfuneralhome.com

Offer Condolence for the family of RINGER, KATHRYN A.