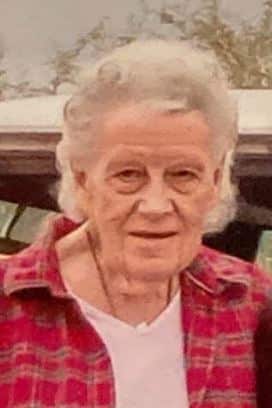 Alice Rink died, with her two daughters beside her, on November 23, 2022, two days after her 93rd birthday. Alice was born to Frank and Margie (Olson) Hunter on a dairy farm in Richland Center, WI on November 21, 1929. Her father was a farmhand and she began helping her parents with the milking by the time she was 8. When her beloved mother passed away when Alice was 10, she began her lifetime of taking care of people. She became mother to her two siblings, Arles and June. Later she married Leo Rink, the manager of the A&P grocery store in Richland Center. He was a widower and together they raised his four children, Mary, Leo, John and James. Alice and Leo’s daughter, Rita, was born in Richland Center. In the summer of 1956 they packed the belongings they could get into a casket crate, put it on a train, put the 5 kids into the old ‘51 Plymouth and headed to sunny Arizona, as the doctor advised for Leo’s arthritis. Their daughter, Carol, was born there in 1960 with special needs. They put their faith in the Lord that they would do the right thing and became dedicated to providing education and a life at their home for Carol, at a time when that was not done. After Leo’s death in 1978, Alice continued the daily job of being a mother to Carol with extraordinary love and patience. This love, patience, kindness and caring was freely given by Alice to all she knew. Alice was always involved as a volunteer in Carol’s schools, starting at Perry Rehab. Later she was employed as a caregiver at the Lura Turner Homes, a group home for developmentally disabled adults that was associated with Carol’s day program. She loved, cared for and worried about every member of her family. She was the family matriarch and historian. Always remembering details others had long forgotten. For over 60 years Alice hosted the annual Christmas Eve event at her home. Filled with family and extended family, often from out of state or the country, usually numbering 60 or more in attendance. There was always laughter, joking, catching up on family events of the year and retelling the old family stories. Family favorite foods arrived in abundance to accompany the Rink tradition of oyster stew made by Alice. Each new generation loved this Christmas Eve tradition as much as the previous generations. This love of the family tradition, with some going to great lengths to be there, always amazed Alice. It was her unwavering love of each who attended and anyone they brought with them, yet never a disappointment or judgment if you couldn’t make it, that made Christmas Eve what it was for the Rink family.
Alice is survived by her sister and brother-in-law, June and Loren Heckendorn; her children and their spouses, Leo & Pat, John & Marlas, James, Rita & Don Patton and by Carol. Her 16 grandchildren, Julie Bak, Diane van Aller, David van Aller, Linda Bak, Lorraine Jones, Christine Rink, Alan Rink, Bryan Rink, Ashlee Rink, Autum Berger, Piper Rink, Kim Edwards, Brande Ellsworth, Christopher Patton, Philip Patton, and Nicholas Patton. She had 29 great-grandchildren and 2 great-great grandchildren. Alice also leaves behind a loving aunt, niece, nephews and cousins.
Alice was preceded in death by her parents, Frank and Margie; her brother, Arles; her husband, Leo and his daughter Mary van Aller. And by many Norwegian ancestors who awaited her in heaven with a freshly made piece of lefse and a card game of euchre.
A funeral Mass will be held for Alice on Monday December 12, 2022 at 10AM at St. Francis Xavier Church, 4715 N Central Avenue, Phoenix. There will be a visitation one hour prior for family and friends at the church. For those unable to attend the funeral, please join the live stream link on the St. Francis Xavier Church website.
Following the Mass there will be a reception in Anderson Hall at St. Francis Xavier.
Burial will be Tuesday, December 13, 2022 at 1PM at St. Francis Cemetery.

Offer Hugs From Home Condolence for the family of RINK, ALICE