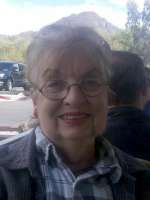 Rita Risi was born in Ft. Wayne , Indiana, February 24th, 1935 and she was one of eight children. Rita had a twin brother, Richard, who passed away in the same long term care facility, Acoma Healthcare, earlier this year. They came into the world together and God graciously held them together at their parting. Ginger and her staff at Acoma showed great love and care to our mother and we wish to give them a heartfelt thank you and say how much we appreciate their dedication to those they serve. Rita is survived by her two loving sons: Joseph and John. She has three remaining sisters and five grandchildren.  Rita met her husband (deceased 1990) in Detroit at the age of 17, and their first son Joseph was born three years later in Phoenix. She was a career waitress for 45 years and the surrogate mom for so many at Bandersnatch Brewpub, in Tempe, until her retirement. For those who really knew Rita, she was best known as a living saint for some and hero to others. One and the same really, for saints are those who live their faith heroically.  She was generous to a fault, always thinking of others’ well being. There was no one who would come to her home, without being offered something to eat or drink. She never looked for repayment, thanks or recognition. But now she has been recognized. If you heard a great clap of thunder on Saturday, it was the saints’ applause and she came marching into Heaven. We love you and miss you mom. Toodle Ee OOHH! Memorial Mass will be held at 4:00pm, Saturday, September 21, 2013 at Mt. Claret Retreat Center, 4633 North 54th Street, Phoenix.

Offer Hugs From Home Condolence for the family of RISI, RITA ANN