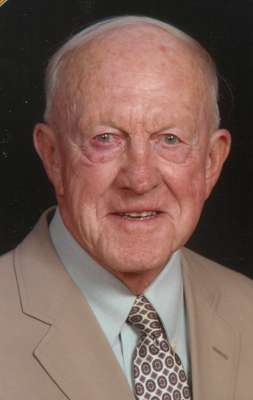 Ken was born March 30, 1927 in Cumberland, Maryland to parents Alfred and Effie Ritter. He attended LaSalle High School in Cumberland Maryland, where he was senior class president. After serving in the United States Army from 1947 to 1950, he went on to attend Pasadena City College, and completed his engineering education at Cal Poly in San Luis Obispo, California.

He married Rose Marie Neuneker and joined Lincoln Electric as a welding engineer in 1954. Ken and Rose began raising their family of seven children in Marion, Iowa, later moving to Davenport, Iowa. He moved his family to Phoenix in 1977. He was honored to work nearly 40 years for Lincoln Electric, a company known for its principles, integrity and its great respect for employees. He retired as district sales manager in 1994.

Ken led a life devoted to God and to his family. Services to celebrate his life include Visitation from 5-8 PM with a Rosary beginning at 7 PM, Friday evening, June 6th, 2014 at Whitney & Murphy Funeral Home, 4800 E. Indian School Road. The Funeral Mass will be on Saturday, June 7, at 3 PM at St. Francis Xavier Catholic Church, 4715 N. Central Avenue, Phoenix. In lieu of flowers, donations are encouraged to St. Francis Xavier Capital Campaign, or to Hospice of the Valley.

Offer Condolence for the family of RITTER, EDWARD KENNETH “KEN”