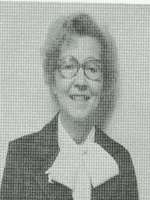 Margaret K. Ritter of Phoenix died December 13, 2011. Our dear Margaret was born in Berlin, Germany and, at the age of 2, came to this country with her parents and sister Eleanor Rossi (deceased) to live in Buffalo, NY. When she married John Ritter in 1943, they made their home at Schenectady, NY. After WWII, when John had a good career with Eastman Kodak Co., they both fell in love with the desert southwest. People ‘back East’ thought they were ‘crazy’ to leave a good job and move to the small desert community of Scottsdale, but John and Margaret started the J. Ritter Company and they enjoyed a good business for many years making jewelry for several of the top jewelry stores in the Southwest. However, Margaret was also a woman of prayer and she knew that man does not live by bread alone … and her prayers were answered for John when he made a very conscious profession of faith and received his First Holy Communion on the very day he died. Margaret lived her life with dignity and poise and was well known for her heart of service to others, especially during her eight years of service in the office of St. Theresa Catholic Church. During her last eight years, she faced the challenges of debilitating illness with the kind of peace that the world cannot give, having experienced God’s guidance and grace her whole life. The challenges of this life are now over for her and we have confidence that she will rest in peace. Margaret is survived by her beloved grandnieces Colleen Manley and Mandy Tynan who were always there for her. Funeral Mass will be held at 10:00am, Monday, December 19, at St. Theresa Catholic Church, 5045 E. Thomas Road. Interment will follow at St. Francis Catholic Cemetery.

Offer Hugs From Home Condolence for the family of RITTER, MARGARET K.