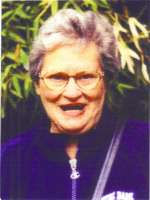 76, of Scottsdale, Arizona passed away 12 June 2011 after a long battle with Alzheimer’s. Born 30 January 1935 in South Bend, Indiana to George and Elizabeth Pearl White, Joan graduated from St. Joseph Academy in South Bend, Indiana in 1953. She married her one true love, Ronald Ritter, on 20 November 1954 at St. Joseph’s Church in South Bend, Indiana. She and Ron lived, built their life and raised their four children in South Bend, Indiana. Much of her career was spent in the medical field, serving as administrative assistant to Dr. Gary Fromm. She served as a volunteer at Copshaholm Mansion and was heavily involved in her parish, Little Flower Catholic Church, both in South Bend, Indiana. She and Ron also served as “parents” for the We Together Singers and volunteered for Cursillo and Marriage Encounter, before retiring and moving to Scottsdale, Arizona in 2003. Despite her many accomplishments and achievements, Joan would undoubtedly want to be remembered as one utterly dedicated to her family. She was a devoted wife, mother, grandmother and great-grandmother. She brought a glowing smile, a warm embrace, and a great story to every room she entered. She is preceded in death by her siblings George Lewis White, Marie Lucille Regan, and Charles Edmund White. She is survived by her husband Ronald of 57 years, and her children Anne (Patrick) Madigan of Paradise Valley, Arizona, William of South Bend, Indiana, Michele of South Bend, Indiana, and John of Atlanta, Georgia; her nine grandchildren Patrick (Ruth) Madigan, Sean Madigan, Megan (Bradley) Opitz, Sioban Kerr, Ian Kerr, Allison Madigan, Steven Ritter, Christopher Ritter, Anna Ritter, and her two great-grandchildren Emily and Sofia Madigan. A Visitation will be held from 6:00-8:00PM with a Scripture Service at 7:00PM, Wednesday, 15 June at Whitney & Murphy Funeral Home, 4800 East Indian School Road, Phoenix, Arizona. A Funeral Mass will be celebrated at 10:00AM, Thursday, 16 June at St. Theresa Catholic Church, 5045 East Thomas Road, Phoenix, Arizona. In lieu of flowers, memorial contributions on Joan’s behalf may be sent to Scottsdale Hospice of the Valley, 1510 East Flower Street, Phoenix, Arizona 85014 or call 602.530.6900 or to The St. Theresa Parish Scholarship Fund, 5045 East Thomas Road, Phoenix, Arizona, 85018.