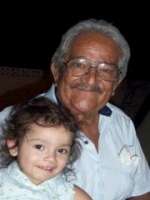 passed on with peaceful Grace to be with Jesus on June 22, 2011, surrounded by his family. He was born in Ray, Arizona on October 29, 1932. He served his country in the Air Force in the 50’s, and worked for the Post Office for over 30 years at the Capital station. He was a single man who selflessly devoted himself to his mother, brother, sister’s, cousins and all his nieces and nephews. He leaves behind his sister Josephine Delfino and brother Pete Rivera. His passing is our loss and Heaven’s gain. Visitation will be from 4-8pm, with a Rosary at 7pm, Sunday, June 26 at Whitney & Murphy Funeral Home, 4800 E. Indian School Road. Funeral Mass will be at 10am, Monday, June 27, at Ss. Simon and Jude Cathedral, 6351 N. 27th Avenue, Phoenix. Interment will be at 12:30pm, Monday, June 27, at the National Memorial Cemetery of Arizona, 23029 N. Cave Creek Road, Phoenix.

Offer Hugs From Home Condolence for the family of RIVERA, RALPH GUS