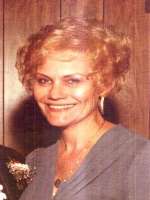 77, of Casa Grande passed away on the morning of August 17, 2013.  Born November 6th, 1935 to Odale and Henrietta Guinn she was the youngest of six children.  She was raised in Charlotte, NC where she married her husband Mike Robles in 1951.  They moved to Phoenix in 1952 where they raised their two daughters.  Vera spent 29 years employed in the engineering department at Motorola, and after retiring, she assisted running a masonry business with her husband.  She is survived by her husband of 62 years Mike, sister Myrtle, daughters Debra and Denise and 4 grandchildren.  Visitation will be held from 6-8pm with a Rosary at 7pm, Thursday, August 22, 2013 at Whitney & Murphy Funeral Home, 4800 E. Indian School Road, Phoenix.  Funeral Mass will be at 10am, Friday, August 23, at Immaculate Heart of Mary Catholic Church, 909 E. Washington Street. Interment will follow at St. Francis Catholic Cemetery.

Offer Hugs From Home Condolence for the family of ROBLES, VERA E.