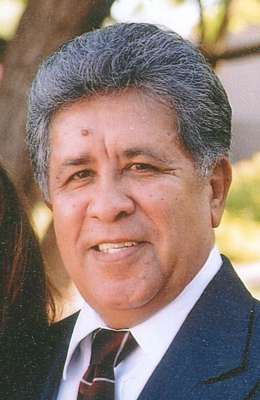 71, of Phoenix passed away peacefully on October 14, 2016.   David is survived by his beloved wife of 27 years, Kathy and his children Davie, Ray and Jennifer.  Sisters, Bobbie Benites, Cathy Chavez-Bohnsack, Anna (Ben) Chavez, Diana Chavez, Angela (Woody) Chavez-Weld and Laveer Beceria.  Brothers, Michael (Norma) Chavez, Robert (Lupe) Chavez and many nieces, nephews and cousins who all loved him.  David is preceded in death by his parents Esther and Ray Chavez and Brothers Jimmy and George Chavez. David was a parishioner at Immaculate Heart Church.  He was a proud alumni of Immaculate Heart Grammar School, St. Mary’s High School and Phoenix College.  David was well known for his talent in basketball.   He served his country by enlisting in the United States Army where he was also able to showcase his talent for basketball.   David retired from the restaurant management business.  He lived life to the fullest, always praising his wife and children loving all of his extended family, enjoyed cooking and golfing.  A Visitation will be held from 8:30 to 9:30 a.m., with a Rosary at 9:30 a.m. and Funeral Mass will be celebrated at 10:00 a.m., Friday, October 28, 2016 at St. Mary’s Basilica, Phoenix.  Burial to follow at St. Francis Catholic Cemetery. In lieu of flowers, please consider a donation to be made to the National Kidney Foundation.  Arrangements entrusted to Whitney & Murphy Funeral Home.

Offer Hugs From Home Condolence for the family of ROCHA, DAVID RAYMOND