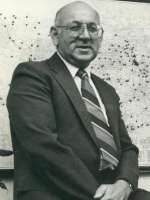 William James Rocke passed away peacefully June 9, 2013.  He was born July 23, 1924 in Grand Junction Colorado.  He is survived by his wife Garnet of 48 years.  Bill had two sons, Jim of Phoenix, AZ., and Bill Jr. of Grand Junction, CO.  He has 3 grand children, Raquel, Katie, and Ethan by his son Jim.  Bill was a combat veteran of WWII in the South Pacific. He has a law degree from Denver University.  Bill founded Frontier Adjusters Inc. in 1957 which went on to become a nationwide firm. Friends may visit the family between 6pm – 8pm this Thursday, June 13th at Whitney & Murphy Funeral Home, 4800 E. Indian School Road, Phoenix, AZ.  In lieu of flowers, donations may be made to your favorite charity in memory of Bill Rocke.

Offer Hugs From Home Condolence for the family of ROCKE, WILLIAM JAMES