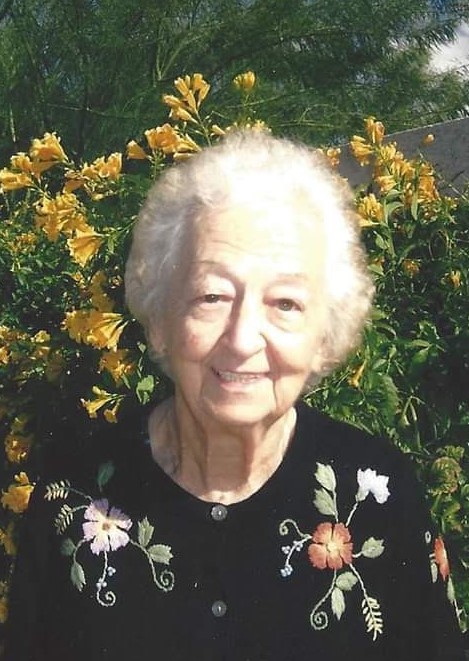 Evelyn Rodack died peacefully at her home in Phoenix, Arizona on Tuesday, February 19, 2019 at the age of 96 years old. She was born on April 7, 1922 in New York City, New York, and she married her high school sweetheart, Ted Rodack, in Jersey City, New Jersey in 1945. During the early 1950s, Evelyn and Ted relocated to Phoenix, Arizona, where she worked as the cafeteria bookkeeper for the Madison School District until she retired. Evelyn had 5 children, and her children remember her as a loving mother and caregiver who was deeply devoted to her family.
Evelyn is survived by her sister, Catherine Carinci and her 5 children: Joan Zubow, Michael Rodack, Patricia LeGendre, Robert Rodack, and Susan Koomen; her 9 grandchildren: Ed Zubow, Andrew Rodack, Alex Rodack, David LeGendre, Susan LeGendre-McGhee, Ben Koomen, Sarah Bell, Katie Koomen, and Solomon Koomen; and her 6 great-grandchildren. She is preceded in death by her loving husband, Ted Rodack.
Visitation will be held on Tuesday, February 26, 2019 at 12:30 P.M. with a Rosary at 1:00 P.M. and the Funeral Mass will follow at 1:30 P.M., at Saint Thomas the Apostle Catholic Church, 2312 E. Campbell Avenue, in Phoenix. Burial to follow at St. Francis Catholic Cemetery. Condolences may be expressed at www.whitneymurphyfuneralhome.com

Offer Hugs From Home Condolence for the family of RODACK, EVELYN