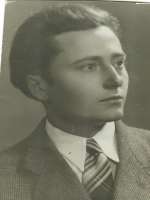 Martin Rodek, 90, died peacefully Sunday November 11, 2012. Martin was born August 10, 1922 in Totsemarton, Hungary. He came to the United States from Hungary in 1956 and settled in Phoenix in 1969. Martin was a successful shoemaker in the Phoenix area for many years. He retired in 1995. His hobbies were playing chess and fishing. He is preceded in death by his wife Suzanna Rodek and his son Martin Rodek, Jr. Martin is survived by his son George Rodek, daughter Dorothi Cassini, and grandchildren Rachel Rodek Gargano and Adam Cassini. Visitation will be from 9:00-9:30am, Monday, November 19, 2012 at Whitney & Murphy Funeral Home, 4800 E. Indian School Road, Phoenix and Funeral Mass at 10:00am at St. Theresa Catholic Church, 5045 E. Thomas Road. Interment will follow at St. Francis Catholic Cemetery.

Offer Hugs From Home Condolence for the family of RODEK, MARTIN