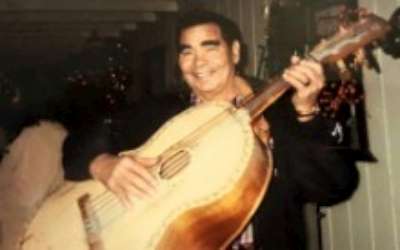 David Tapia Rodriguez was called home to his Savior, our Lord, on Monday August 10th, 2015. He was a devoted husband, father, son, brother, friend, and servant of God. Honor, courage, integrity, humility, and dauntless pride in all he did, were the foundation of his journey through this life. He was a loving and giving man to any and all whom he encountered. David is preceded in death by his first wife Ida, and his parents Gus and Esther. He is survived by his loving wife Carmen, and children David Jr., Rick (Jacquie), Ron (Monica), Annette (David), Michael (Tina), John (Monica, deceased) and Carlos (Denee). He is also survived by his stepchildren Anthony, Toby, and Michelle, 28 grandchildren, 22 great-grandchildren, 8 great, great-grandchildren, 19 nieces and nephews, and his brothers Lee and Albert. A veteran of the United States Navy, David is an inspiration to all who knew him, and he will forever be honored in our hearts. There will be a Rosary at 10:00 AM with a Funeral Mass at 10:30 AM, Tuesday, August 18, 2015 at St. Agnes Catholic Church, 1954 N. 24th Street, Phoenix. Interment will follow at St. Francis Catholic Cemetery. Arrangements entrusted to Whitney & Murphy Funeral Home.

Offer Hugs From Home Condolence for the family of RODRIGUEZ, DAVID TAPIA