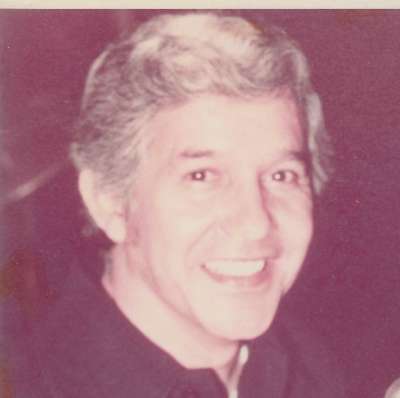 Frank Romero, 86, surrounded by his family passed on Nov 21, 2014. He was born on Nov 13, 1928 in Phoenix to the late Rev. Librado and Nellie Romero. He was one of seven children in the family. Frank was a lifelong resident of Phoenix, he attended Monroe Elementary school and he graduated from Phoenix Union High School. He then went on to receive his degree in Political Science from Phoenix College. Frank was retired from the City of Phoenix, where he worked as a City Planner for 35 years. Frank married his wife and companion, Louise Ambrosio in 1957. Together they raised four sons. Frank was a pianist and bandleader of Frank Romero y Los Flamingos. His group was well known and entertained hundreds throughout the valley in the 50’s and 60’s and 70’s. He was a big source of inspiration to his sons who became professional musicians when they joined their Dads group, before they were old enough to drive.   Frank was preceded in death by his wife Louise, his parents, brothers Henry and Hector. Frank is survived by his sons Danny, Marc and daughter in law, Diana, sons Craig and Gary, three sisters, Viola, Lucy and Margaret and his brother Gilbert; grandchildren, Michael, Kevin, Daniel Jr, Ryan, Cori, Sean, Kevin, Gary II, Kristin, Steven, Ian; great grandchildren Kevin’s Ariel, Madison, Hayden, Michael and Gary ll’s Amara, and Cori’s Mikey, Isabella and Maximus. His kindness, love, sense of humor and generosity will be celebrated: Wednesday, December 10th, 7pm at Whitney & Murphy Funeral Home, 4800 E Indian School Road, Phoenix,‎ AZ‎ 85018. May He Rest In Peace

Offer Hugs From Home Condolence for the family of ROMERO, FRANK