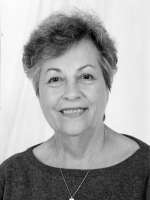 85, of Phoenix, Arizona, passed away July 29, 2010, at The Gardiner Home surrounded by Family. Louise was born January 26, 1925 in Brooklyn, New York, and grew up in Huntington, Long Island, New York, the daughter of late the Luis and Maria Ambrosio. She was the youngest of 7 siblings and is survived by her brother George. In 1956 she married her second husband and companion Frank Romero, who survives. Louise moved from Huntington with her sister Rose, brother-in-law John, and their 6 children to Phoenix in 1951 She was worked for Mountain Bell in various capacities for 34 years and retired as a network engineer in 1984, and was a member of The Telephone Pioneers for Retirees’. Louise is survived by son Danny, son Marc and daughter-in-law Diana, son Craig and son Gary; grandchildren, Michael, Kevin, Daniel Jr., Ryan, Cori, Sean, Kevin, Gary II, Kristin, Steven, Ian; great grandchildren Ariel, Madison, Hayden, Michael and Amara, as well as being an Aunt, Great Aunt and Great-Great Aunt.
A private service was held Wednesday, August 4 at Whitney & Murphy Funeral Home. In lieu of flowers and gifts the family request that donations be made to Hospice of the Valley in Mrs. Romero’s name in gratitude for the help and care they provided to Louise and her family.

Offer Hugs From Home Condolence for the family of ROMERO, LOUISE