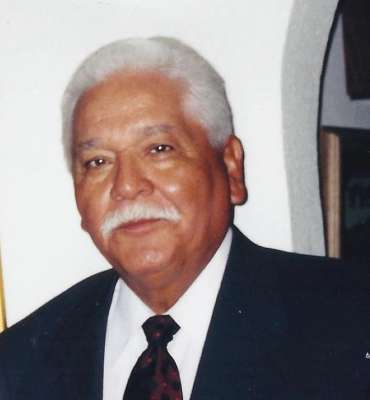 “Sal” , 77 of Chandler, AZ passed away on January 31, 2014 with his loving wife and family by his side. Sal was born on December 8, 1936 in San Isidro, New Mexico, and was a member of the Tewa Indian Pueblo in Tortugas, New Mexico.  Sal battled courageously for some time against heart disease. He is now with our heavenly Father, the Blessed Virgin of Guadalupe, his beloved son Richie, his mother and father, mother and father-in-laws, and brothers. Sal will be remembered as the most loving husband, father, and grandfather, always putting his family first. Sal and his wife, Mary, began their journey together as high school sweethearts and were married for 58 years. Sal began at a young age to know the meaning of hard work, first by mowing lawns and after high school by joining the United States Marine Corp. He worked at White Sands Missile Range, Western Electric, and Supervisor at AT&T and Lucent. More recently, his work included Answers and Apples and Gateway as a supervisor and navigator at Phoenix International Sky Harbor Airport. Throughout his tenure, he was a friend, role model, and mentor. Sal is survived by his wife Mary, daughter Julie, son Sal Jr., granddaughter Camille, brother Ernesto and his wife Jita, sister Amelia  and her husband Ernesto Montoya, sister Licha Alderete, sister-in-law Ophelia and husband John Dickson, sister-in-laws Juliette and Dolores Narvaez, brother-in-law Henry Narvaez and wife Bessy, and many nieces and nephews. Visitation will be held at St. Mary’s Roman Catholic Basilica, 231 N. 3rd Street, Phoenix, AZ 85004, on Wednesday, February 5, 2014 from 5:00 to 6:30 pm with a Rosary immediately following and closing with a special Indian ceremony. A Funeral Mass will be held at St. Mary’s Roman Catholic Basilica on Thursday, February 6, 2014 at 10:00 am. Interment will be conducted at St. Francis Catholic Cemetery.  Funeral arrangements by Whitney & Murphy Funeral Home, 4800 E. Indian School Road, Phoenix, AZ 85018.

Offer Hugs From Home Condolence for the family of ROSALES, SALVADOR C