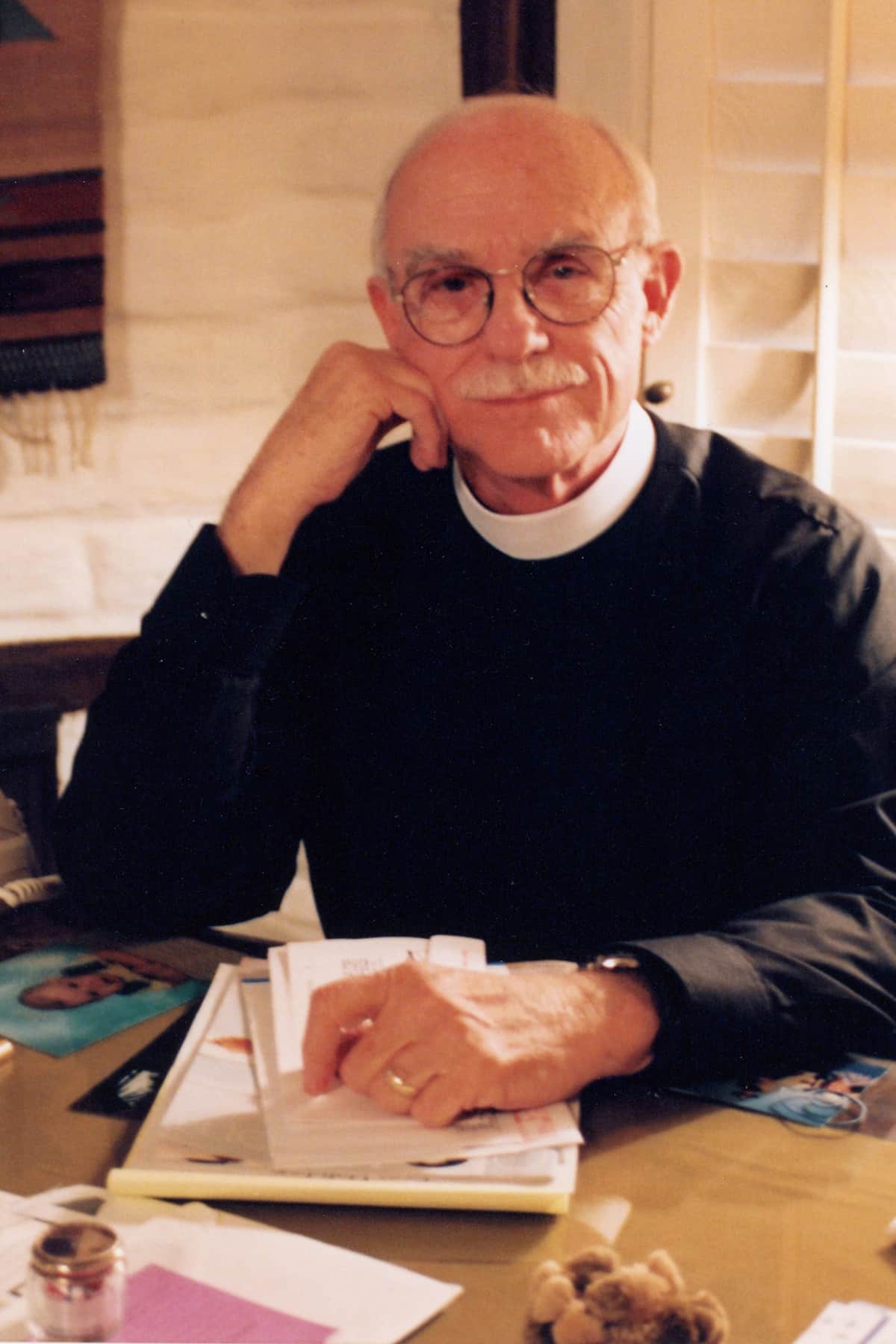 Q. Gerald “Jerry” Roseberry passed away on July 26, 2022 after a short illness. Jerry was born January 1, 1932, to Quintus and Beuna Roseberry in Jacksonville, Florida. Second of 6 children, Jerry grew up in Scottsdale, Georgia, at the time, a poor, segregated cotton mill town on the outskirts of Atlanta. Family life revolved around a small fundamentalist church. Tobacco, alcohol, dancing, swearing, and playing cards were not allowed. Nor was association with anyone who engaged in such “vices”. Foreign missionaries’ testimonials at the church’s annual Missionary Conference enthralled young Jerry. He felt called to be a foreign missionary.

As Jerry approached adulthood, he became uncomfortable with the overt racism that surrounded him, and he began to chafe at his narrow social circle. A good student, Jerry applied for and was granted admission to Wheaton College in Illinois, where he received a bachelor’s degree in theology. While at Wheaton he met and fell in love with Evelyn Sikes. They married in June of 1953, shortly after Jerry graduated. They moved to Philadelphia where they lived while Jerry studied at Princeton Theological Seminary. He was ordained as a Presbyterian pastor in April 1957. Although he had left his family’s church, he still felt called to be a missionary.

That calling led him to the Community Presbyterian Church in Chama, New Mexico, a tiny town high in the mountains. To Jerry, serving the church in Chama in the late 1950s had many of the characteristics of service in a foreign mission field: the town’s population consisted primarily of people with a different ethnicity from his, it was quite poor, remote, and lacking many of the conveniences Jerry and Evie were accustomed to.

Unlike the missionaries he had met in his church, Jerry did not try to convert anyone to Christianity. Instead, he engaged in community service. One of his first projects was to spearhead the development of a clean water system for Chama after learning soon after his arrival that everyone had to boil their water to make it safe to drink.

In 1961, Jerry and his young family, which now included two young daughters, moved to Chicago, Illinois. There he served as assistant pastor at the United Church of Hyde Park and later as pastor at Evanshire Presbyterian Church in Skokie. He became active in the civil rights movement, joining the Skokie Human Relations Council and helping to form the Illinois Migrant Council to address the problems of migrant workers harvesting crops on the large farms in Illinois.

From Skokie, Jerry moved to Mount Pleasant, Iowa in 1967. There he initiated and led many community projects, including the creation of a group home for troubled adolescent boys, establishing low-cost housing for the elderly, and funding the purchase of a dialysis machine for the local hospital.

In 1974 the Roseberry family moved to Phoenix, where Jerry served as pastor at Camelback Presbyterian Church until 1988. While serving that church, he, along with others from the community, founded Hospice of the Valley in 1977. It was the first in the Phoenix area and among the first in the nation. In 1987, Jerry, concerned about the growing number of homeless people, decided to live anonymously among them for some months to better understand their needs and problems. Building on that experience, with the help of Gloria Dei Lutheran Church of Paradise Valley, he established the Ecumenical Chaplaincy for the Homeless and served as its chaplain until his retirement in 1993.

Jerry and Evie were divorced in 1988. He married Vada Smith in 1990. The couple were active in Trinity Cathedral and other organizations. Vada passed away from cancer in 2012, after which Jerry moved to the Beatitudes Campus of Care. While there he became an activist for sustainability: launching a recycling program, persuading the Beatitudes administration to install solar water heating where practical, and marching in the historic NYC Peoples Climate March in September 2014 at the age of 83. Jerry passed away in the memory support unit at The Beatitudes Campus of Care with his daughters Karen and Lynn by his side, surrounded by the caring staff of the Beatitudes and Hospice of the Valley.

Jerry’s life’s work grew from his experiences with individuals in need. Many of them he met while they were alone in their suffering or struggling with their families. Some of them showed up at church, others at the front door of his home, along the road, in a parking lot, or in the hospital. Jerry leaves behind many who continue to feel the impact of his life’s work.

He is survived by a sister, two brothers, his daughters, and four grown grandchildren.

There will be a celebration of Jerry’s life at Trinity Cathedral, 100 W. Roosevelt St, Phoenix, Arizona 85003, on Sunday, September 25, 2022 at 3:00 pm. In lieu of flowers, please donate to Hospice of the Valley, Trinity Cathedral’s support of Garfield School food pantry, or 350.org., which works to accelerate a fast and just transition to 100% renewable energy for all.

Offer Hugs From Home Condolence for the family of ROSEBERRY, REV. Q. GERALD