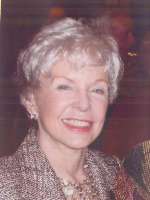 Vada Le Stewart Roseberry was born on September 25, 1930 in Phoenix, Arizona, the only child of Jessie and LeRoy Stewart. She passed away surrounded by her loving family on August 30, 2012. Grandma Vada, as she was warmly referred to by her family, attended Emerson Elementary, North High School and the University of Arizona, where she pledged Kappa Alpha Theta. She was a member of the Board of Visitors, the Columbine Garden Club; she was a past President of the Casa Grande Union High School Board and was an elder in the Presbyterian Church.
At the youthful age of 18, Vada met and married Milton P. (Bud) Smith and after Bud graduated from U of A moved with him to the family farm 25 miles west of Casa Grande, AZ. On the farm, Vada and Bud raised four fun-loving sons: Le, Stewart, Mike and Gary. Until her death, Vada’s sons remained her pride and joy. Vada moved back to Phoenix in 1975, and married The Reverend Dr. Q. Gerald Roseberry in 1990. In their life together they became a vital part of Trinity Episcopal Cathedral.
In addition to being a wonderful wife, mother, and grandmother (great), Vada was an accomplished artist. Vada’s art was displayed in numerous locations most notably – Grand Palais in Paris, France, San Miguel de AlIende, Mexico City, Laguna Beach, Wagon Wheel Gap in Colorado, Tucson and Phoenix.
Vada masterfully intertwined her art with her unwavering faith as is beautifully evidenced in the stained glass window gracing the wall above the altar in Trinity Cathedral. Originally asked to lend her advice on designing a new window after a fire destroyed the original one, Vada’s loving and imaginative spirit ultimately produced the window that now adorns the north end of the Cathedral. All who look at it can see Vada’s love of life and steadfast belief in Christ.
Vada’s other love was traveling. She was always on the move, visiting all corners of the world. She took a journal wherever she went and wrote, sketched and painted her experience. Her travels impacted her in so many ways and were reflected in many of her paintings.
Vada is survived by her devoted husband, Q. Gerald (Jerry) Roseberry, her four sons, Le (Jacque), Stewart, Mike (Mona), Gary (Andrea), 15 grandchildren and five great- grandchildren: Channen, Suzi, Tyler, Mason, Jared, Jessica, Taylor, Hannah, Spencer, Morgan, Adrienne, Kimberly, Allison, Max, Carter, Victoria, Curtis, Vada, Zoe and Schuyler. Her entire family will miss their Grandma Vada dearly and will hold her memory, her beautiful smile, her sparkling eyes and her loving and generous spirit in their hearts forever.
A Memorial Service will be held on September 17th, 2012 at 10:30 am at Trinity Episcopal Cathedral, 100 W. Roosevelt, Phoenix.
In lieu of flowers, contributions to Trinity Episcopal Cathedral or Hospice of the Valley, 1510 E. Flower, Phoenix, AZ, 85014 would be kindly appreciated.

Offer Hugs From Home Condolence for the family of ROSEBERRY, VADA LE STEWART