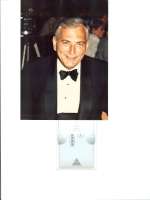 Joseph Dallas Rowe – A long-time Valley resident, passed away July 9, 2011.
A man of action over words, a motivating role model and positive influence, Joe always gave family and friends first priority. In setting his “issue” up to succeed and excel academically and professionally, Joe postulated, “May you grow in the love that surrounds you and the knowledge that the circle of love extends to all who know you and beyond.” Joe was born the son of John Abram Rowe and Floy Armstrong Rowe in Hollywood Hospital on January 29, 1929, his father’s 33rd birthday. Though confronted with the loss of his mother in childbirth and brother at the conclusion of WWII, Joe remained a positive soul. Step-siblings Charles Harris Flannery and Martha Flannery Betz introduced a breadth of family that brought Joe much happiness and sense of family pride.
Outside of school, Joe spent his formative years fighting fires and working dude ranches while managing youthful diversions and adventures along the way. While a Marine Corp Reserve, Joe enrolled at Cal (UC Berkeley) in 1948 where he studied Economics and joined the Phi Gamma Delta Fraternity. Graduating in 1952, Joe entered the insurance industry as a property & casualty agent for US Fidelity & Deposit Company. About this time, Joe met Aneta “Punkie” Peabody whom he married on June 12, 1954. They transferred to the greater Phoenix area immediately thereafter.
In 1956, Joe joined the Valley National Company, where he specialized in meeting the insurance needs of contractors. Joe became an officer of VNCo in 1961 and entertained a lifelong career with the agency eventually holding executive positions of Secretary-Treasurer and CFO. During those years, Joe chaired the Central Arizona CPCU and sat on both the City of Phoenix and Maricopa County Citizen’s Bond Advisory Boards.
Ever community-minded, Joe took on several philanthropic initiatives and among other positions became President of the Board of the Phoenix Center or the Blind and President of the Board of Planned Parenthood (formerly Family Services). He and Aneta were pillars of the United Church of Christ, Church of the Beatitudes, where he served as congregation President. Joe sat on several boards including the UCC Insurance Advisory Board and headed up annual fund-raising for the Valley Of The Sun United Way.
Joe and Aneta started their family in 1956, raising three children: Scott (Diane), Kathleen “Kappy” (Mark), and Michael (Nancy). He proudly enjoyed his three grandchildren – Natalie, Will and Michael. Joe developed a keen interest in sailing and raced Thistles with sons Scott and Mike until the mid ‘90s.
A Memorial Service will be held on Saturday, July 16th, 2011 at 3 PM at the Church of the Beatitudes, 555 West Glendale, Phoenix, AZ 85020. Arrangements entrusted to Whitney & Murphy Funeral Home.

Offer Hugs From Home Condolence for the family of ROWE, JOSEPH DALLAS