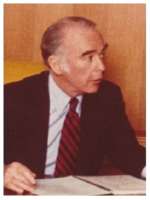 Philip H. Roy “Phil”, devoted husband for more than 68 years to his college sweetheart, Treva “Billie” Poling Roy, died in his home in Phoenix, Arizona, Wednesday, November 28, 2012. He was 92. The eldest of three children, Phil was born in Newark, NJ, on May 25, 1920, to Joseph and Doris Roy. Young Phil was a soprano in the choir of St. George’s by-the-River in Rumson, N.J. He enjoyed singing most of his life, singing in local church choirs, as a cantor for a temple, and a Tenor in a “barber shop”-styled group. Though he would begin his college career as a music major, Phil decided the vocation of musician would not provide the financial security that he sought and pursued a Commerce and Finance degree instead. A Sigma Chi brother, Phil graduated Phi Beta Kappa from Bucknell University in 1942. He and Treva were married by her father December 26 that same year before he joined the U.S. Navy war effort in the South Pacific as Lieutenant. Phil’s professional life began with his certification as a public accountant in New York State. He worked for the Liedesdorf Public Accounting agency and Trans World Airlines before accepting a position as a VP/Finance with Merck & Co, Inc., in 1951. At Merck, he successfully rose from International Division Director of Finance (1964) to Corporate Controller (1968) to Vice President-Finance (1972) and, finally, to Senior Vice President and Member of the Chairman’s Staff (1976). Phil was an active member of the Financial Executives Institute and the American Institute of Certified Public Accountants, as well as a board member for the Arkwright-Boston Insurance Company and Trustees of Bucknell University. After 34 years of outstanding contributions to the success of Merck, he and Treva moved to their retirement residence in Phoenix, Arizona, in 1985.Phil was a generous and anonymous patron of the arts, the Episcopal Church, The Salvation Army, Berea College, Bucknell University, Scottsdale Healthcare and countless local charities and foundations. Phil is predeceased by his son Andrew, his daughter Ann Roy Luehrman, his sister, Jane Bond of Atlanta, GA, and his beloved wife and mother of his eight children, Treva. He is survived by his sister, Nancy Saunders, of Nashua, N.H., six children, 19 grandchildren and 10 great-grandchildren. Memorial Service will be held Friday, January 4, 2013 at 2 PM at All Saints’ Episcopal Church, 6300 N. Central Avenue, Phoenix, Arizona. In lieu of flowers, donations may be made in Philip’s name to Banner Alzheimer’s Institute, 901 E. Willetta Street, Phoenix, AZ 85006.

Offer Hugs From Home Condolence for the family of ROY, PHILIP H.