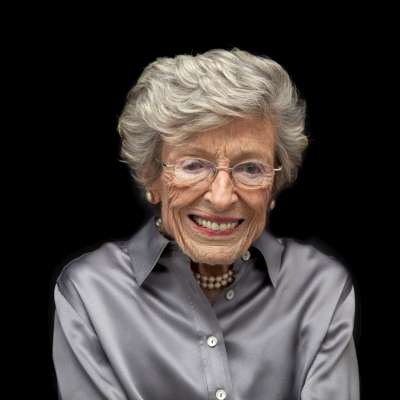 Died in Scottsdale on July 8, 2014, age 93.  Born in Brooklyn, New York, on March 4, 1921, the daughter of Marie and James Newman.  Pat grew up in Brooklyn and Akron, Ohio.  As a child, she loved the outdoors and athletics, playing on the field hockey team in school and enjoying tennis and golf.  Pat graduated from The Ethel Walker School in Connecticut and Pine Manor Junior College in Brookline, Massachusetts, and she attended Akron University.  During World War II, she left college to work full time as a volunteer Red Cross Nurse’s Aide.  While assigned to an Army hospital in Indiana, she met her beloved husband, Bob Rummage, whom she married in 1947.  They began their family in Ohio before moving to Arizona in 1961, joining her brother Kevin Newman and his family in Scottsdale.  Pat was active in local politics, serving as a Precinct Committeeman for 22 years.  She was a Girl Scout leader, and she volunteered generously for Recording for the Blind, the United Fund, the American Heart Association, and her children’s schools.  She was a sustaining member of the Junior League of Phoenix and a 30-year member of Arizona Country Club.  Her children remember her as an avid reader, a political commentator, the most organized person on earth (even if she was always late), and a world-class Instamatic family photographer.  Bob, her husband of 59 years, passed away in 2006.  She is survived by daughter Pamela Rummage Culp of Menlo Park, California, son James (Randi) of Phoenix, and son Stephen (Elizabeth) of Seattle; grandchildren Christopher Culp (Elizabeth), Adam Culp, Emily Favero (Anton), Jeffrey Rummage (Amanda), Everett Rummage, and Carter Rummage; great-grandchildren Landon Rummage, Annaliese Rummage, Teagan Rummage, Winter Culp, Forrest Culp, and Garrett Favero; sisters-in-law Margaret Ragland and Joyce Beasley, both of Tennessee; and eight Newman nieces and nephews, whose birthdays she always remembered.  In lieu of flowers, the family requests contributions to The American Heart Association.  A funeral mass will be held on Saturday, July 12, at 1:00 p.m., at St. Maria Goretti Catholic Church, 6261 North Granite Reef Road, Scottsdale. Arrangements entrusted to Whitney & Murphy Funeral Home.

Offer Hugs From Home Condolence for the family of RUMMAGE, PATRICIA N. (NEWMAN)