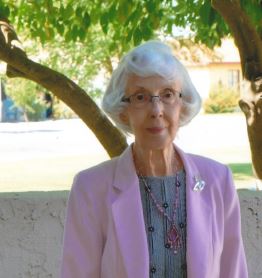 She is survived by her three brothers, Ronald, Martin, and Gerald Kramer, all of Pella, Iowa and her sister, Marian TenPas, of Oostburg, Wisconsin. She is also survived by many friends, neighbors, and acquaintances with whom she kept in contact throughout the years via letters, emails, and greeting cards. She liked keeping informed of life back in Iowa by reading the various newspapers of the towns and people she knew. She will always be remembered for her thoughtfulness of others and the way she remembered and visited her sick and aging friends.

She was married to Peter H. Rus on June 21, 1957 in Pella, Iowa and together they enjoyed forty six years of marriage until Pete’s passing on November 1, 2003.

Ruth moved to Sully, Iowa in 1944 beginning her elementary education in the Ackley School System, and finishing her schooling at Sully Christian School before attending high school at Sully Public High School.

Ruth was a lifetime member of the Phoenix Christian Reformed Church after she and Pete move to Phoenix in 1961. She enjoyed sending out church bulletins to those unable to attend worship services, writing to missionaries, and working in the church library.

She was employed by Motorola Corporation in Phoenix for many years as a secretary and administrative assistant. Ruth was a proficient typist and was very adept at computer use. In her retirement she kept busy doing accounting for Rod’s Carburetor. She enjoyed using her computer to communicate with friends and family and was emailing people until the day she became a patient at Banner Medical Center. She dearly loved caring for the numerous stray cats she and Pete adopted throughout the years.

She will be remembered for her quiet encouragement of others, her constant thoughtfulness, her generosity to those in need, her newsy notes, letters, and emails, and above all, her faithfulness to God.

A Memorial Service will be held on Monday, June 10, 2019 at Whitney & Murphy Funeral Home, 4800 E. Indian School Rd., Phoenix, at 11:00 AM. Condolences may be expressed at www.whitneymurphyfuneralhome.com

Offer Hugs From Home Condolence for the family of RUS, RUTH