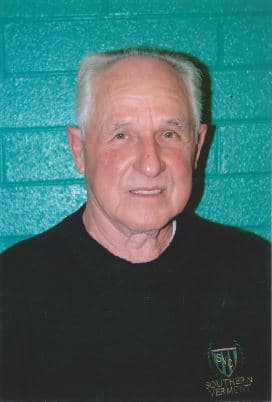 John F. Rusinek, of Phoenix, Arizona, passed away peacefully on October 10, 2021 at the age of 87 after a long battle with dementia. He was born on August 14, 1934 and grew up in Washington, Pennsylvania as 1 of 9 children born to Anthony and Barbara Rusinek. John attended Washington High school in his home town or as he liked to call it, “Wash High.” He came to Phoenix, Arizona in his young twenties where he would meet the love of his life, Sylvia. Sylvia and John were married at St. Thomas the Apostle Catholic Church and have remained active members of the parish ever since.
John proudly served in the United States Navy for 4 years as a Machinist Mate 2nd Class until he was honorably discharged in June of 1957. After his time in the Navy, he began his second and longest career at Salt River Project. He worked for SRP for over 35 years as a Mechanical Maintenance Supervisor at the Agua Fria Power Plant. After his retirement he enjoyed many hobbies. He enjoyed fixing up what needed fixing around the house, was a devoted Steelers fan, an avid hunter, but the one he enjoyed most was making jewelry, including special pieces for his wife and family members. He even became a member of the Maricopa Lapidary Society. Being a proud veteran, he was also a member of the American Legion Post 44.
John is preceded in death by his parents Anthony and Barbara, brothers Joseph, Bruno, Stanley, Tony, and his sisters Adele, Joanne, Mary, and Helen. He is survived by his wife of over 62 years Sylvia Rusinek (Chleva), daughter Lynda Lee Rusinek, son John Michael Rusinek (Toni), granddaughter Rian, grandson Jesse, and numerous nieces and nephews.
A Visitation will be held on Friday, October 29, 2021 from 9:30 – 10:00 A.M., followed by a Rosary prayed at 10:00 A.M. and a Funeral Service at 10:30 A.M., at Whitney & Murphy Funeral Home, 4800 E. Indian School Rd., in Phoenix. Immediately after the services until 12:30 P.M., some light drinks and food will be offered for those who attend. Interment with Military Honors will take place at 1:30 P.M., at the National Memorial Cemetery of Arizona, 23029 N. Cave Creek Rd., in Phoenix.
In lieu of flowers, the family asks that donations be made to either St. Vincent de Paul – Donate – SVDP USA (ssvpusa.org) or the Arizona Weimaraner Rescue – Donate – AZ Weimaraner Rescue (azwr.org) Condolences may be expressed at www.whitneymurphyfuneralhome.com.

Offer Hugs From Home Condolence for the family of RUSINEK, JOHN F.