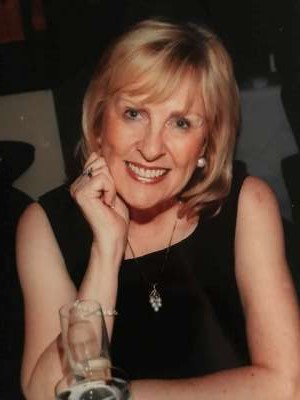 Mary Lou was born in Grand Rapids, Michigan on July 8, 1934 and raised in Detroit, Michigan where she attended St. Mary’s of Redford School. She moved with her family to Phoenix, Arizona in 1952, and subsequently joined United Airlines based out of both Boston and Denver as a “stewardess”.

In 1956, she left the airline when her mother Emily Rosenquist passed away, returning to Phoenix to be near her baby sister Carol and taking employment with Ramada Inn Hotels.

Mary Lou married Robert R. Russell in 1960 after a whirlwind romance. Bob was working for IBM in computer sales. Over their 58 years of marriage, they pursued the computer leasing business, which took them to Los Angeles, Chicago and back to Los Angeles, before founding their own computer leasing business, Systems Marketing Inc. (SMI) in 1970 in Phoenix. The company was sold in 1988, when they moved into real estate development.

If two things stand out about Mary Lou, it was her strong Catholic faith and her fierce love for her family. Mary Lou repeated the rosary every day of her life, and was open and giving to people of all faiths. Her health was greatly tested in her final years, but she refused to concede defeat. Each day presented another opportunity to hit the treadmill and scoff at the hand she had been dealt, always putting her best foot forward.

Mary Lou always insisted on doing the right thing, and following the rules of the road, from putting the recyclables in the right can to not allowing Bob’s friends to inhabit their guest house until they had married. She never met a party she couldn’t host or a holiday she couldn’t decorate, throwing many memorable fiestas at their Las Conchas compound in Puerto Penasco, Mexico.

A reception will be held afterward at the Russell residence.

Contributions can be made to St. Vincent de Paul @stvincentdepaul.net.

Offer Hugs From Home Condolence for the family of RUSSELL, MARY LOU