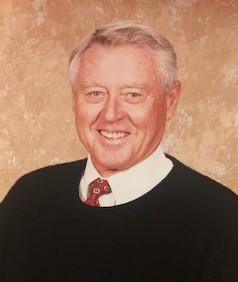 Robert R. Russell, 87, earned his wings surrounded by family on February 1, 2020 at his home in Scottsdale, Arizona. Bob was born in Grand Island, Nebraska on June 11, 1932. He was preceded in death by his parents, William and Hanna Russell, brother William Lee Russell, and his wife of 58 years, Mary Lou Russell. He will be forever loved and missed by his daughter Jacqueline Lee Petchauer (William), son Craig William Russell, grandchildren Christopher Stranz (Jenny) and Katherine Stranz, and numerous nephews, nieces and cousins that he leaves behind. Bob was a ‘people person’ who thrived on being surrounded by friends and extended family, never relinquishing his role as Patriarch of his family and best friend to many until his last breath.

Bob joined Sigma Phi Epsilon fraternity at the University of Nebraska from 1950-1954. Upon graduation, he served first as a 1st Lieutenant, U.S. Army, in West Berlin after the Korean War, from 1954-1956.

After eloping to Las Vegas to marry Mary Lou Rosenquist, Bob began his meteoric rise in the fledgling computer industry at IBM Phoenix, where his first child Jackie was born in 1960. Eventually the young Russell family transferred to La Habra, CA, then moved on to Chicago with Greyhound Computer. Bob then joined a new start-up, Booth Computer Corporation, which took the family back to Woodland Hills, CA, where son Craig joined them.

Through all the moves, Bob’s heart always brought him back to Phoenix. He returned in 1971, founding a computer leasing company called SMI (Systems Marketing, Inc.). SMI is where Bob discovered his wheelhouse, forming many lucrative relationships and transactions. Upon the sale of SMI, Bob founded Russcor Financial, Inc., which served as a springboard for a multitude of real estate developments in Phoenix, Telluride, Flagstaff and beyond.

His passion for living life to its fullest was evidenced by his love for the shores of Las Conchas in Rocky Point, aviation, golf, and sports teams including the Diamondbacks, Cardinals, Nebraska Cornhuskers. Bob’s love for aviation brought the purchase of a TBM-3E Avenger Torpedo Bomber Warplane that he enjoyed taking to air shows to educate the public.

Bob had an unwavering commitment to give back to those in need. He never met a stranger and took a personal interest in each and every person he met, remembering every detail about them and their family. He loved all unconditionally and was a mentor to many young men and women. He even counseled many couples and helped keep many a marriage together with his wisdom.

Bob leaves many legacies behind, including a St. Vincent de Paul Lifetime Achievement Award. He rose early every Monday morning to dispense McDonald’s gift cards to the less fortunate, inspiring them to never give up. He served as a key board member for Goodwill Industries of Arizona, Barrows Neurological Foundation, Brophy High School, Boys Hope of Arizona, among others. He made many lifelong friends along the way, but always treasured those formed at Gerard High School where he served as President of the Booster Club. He also built the Russell clubhouse in his hometown of Fullerton, NE where many would gather after a day of golf.

Bob Russell had a vision long before many did to build a family house in Rocky Point on its solitary beaches, where Bob was able to indulge his love of family, horsepower, fishing and margaritas for decades. He created a family gathering place for many to enjoy for the past 45 years, knowing it made his family closer. The family will continue the legacy of the “Russell Compound”, even offering it as a VRBO for other families to cherish!

In his final days as his body grew tired, his spirit did not. Every wonderful hospice nurse that came to the house would say “I just want to take him home with me, he’s so darn cute”. He got a huge grin on his face when they would call him “Mr. Redford”, which he heard a lot in his younger days. With some gracious help from Mike and Ruth Rosenquist, caregiver Lisa Gledhill Spoomer, and Jackie and William Petchauer, Bob moved onto eternal life, looking out at Camelback Mountain.

His family finds comfort knowing that his strong faith has carried him through the Gates of Heaven, reunited with his wife Mary Lou undoubtedly asking what had taken him so long. We also find solace knowing Bob is now free of the physical limitations that could not discourage or defeat him in his final months.

A Funeral Mass to celebrate Bob’s bountiful life will be held on Saturday, February 8th, 2020 at 12 noon, at St. Theresa Catholic Church, 5045 E. Thomas Road, Phoenix. Donations can be made on his behalf to The Society of St. Vincent de Paul of Phoenix (www.stvincentdepaul.net) Condolences may be expressed at www.whitneymurphyfuneralhome.com

Offer Hugs From Home Condolence for the family of RUSSELL, ROBERT R.