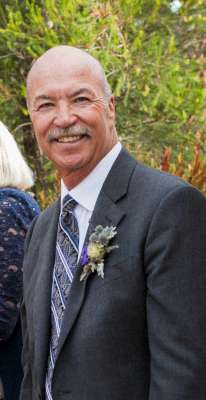 If you met Thomas “Tommy” George Russell, you were with him for life – if you could keep up with him. Born in Phoenix, Arizona on November 3, 1951, he grew up with his siblings Mark, Lamorah and Linn, wreaking havoc and mayhem wherever possible. He lost his mother and father (Shirley and Thomas Gerald) too early, but was blessed with not one but two surrogate father figures in John Sakata and Jay Kemp, along with the undying support of his brother and sisters, including cousin Shirley Wren who was more a sister than a cousin.

He began his career as a karate instructor and a fighter. He opened his own martial arts studio, spending nearly a decade teaching karate, his career culminating in his becoming the Arizona state kickboxing champion. One of the highlights of his career was fighting an opening match for Mohammed Ali in Madison Square Garden.

In business, he was a force to behold. The only thing more potent than his financial acumen was his loyalty to others and theirs to him. It was the stuff of kings and emperors. While working as a “hired gun”, as Tom would put it, traveling around the Southwest from field to field selling produce, he had made a lot of loyal friends. Not long after he turned some of these friends into partners when he formed Pacific International Marketing in the 1980s. Tom always said the key to success was finding good people, bringing them in, and sticking with them through it all. To Tom, it was the people, not the circumstances that made a deal.

Beyond business, Tom was a wild philanthropist. If someone said “I need $100”, he bought them a house. Or if they just needed a small cooling unit to store food, a walk in refrigeration system is what they got. He was outlandishly generous, and enjoyed nothing more than giving people so much that they weren’t even sure how to react.

In love, he found a perfect match in Carol, his wife of 33 years, a woman who could find the humor in even his most ridiculous antics, and whose kindness and dedication was the best-kept secret to his success – in life and business. In his youth, she was his partner in crime, an equal in wit and appreciation of the absurd. He loved her unfailingly and throughout his life, she weathered every storm, every sunny day, with the same love and generosity – his lighthouse no matter how big the waves got.

He is survived by his wife, many friends, siblings, and by his four loving children; Sarah, Anna, Olivia, and John, who will continue to honor him by emulating his generosity, kindness, work ethic, and tactless jokes. Not a week will go by without one of them quoting or employing something profound or funny that he said to them – or something profoundly funny.

Full of life until the last moments, Tom Russell passed away unexpectedly in his home in Phoenix, AZ on January 31st, 2017.

Tom loved nothing more than a party. A celebration of his life will take place on Friday, Feb. 17, 2017 from 11AM-2PM at the Cactus Lane cooler located at 15510-16100 W. Olive Ave. in Waddell, AZ (Directions: the cooler is on the North East Corner of Olive and Sarival Avenues. The entrance is on the East side of Sarival, about a hundred yards North of Olive). His family would like to invite anyone whose life Tom touched to help celebrate his exceptional life. They would also like to encourage anyone that knew Tommy to send stories and anecdotes, humorous or heartfelt, to the family at tombogeorgerussell@gmail.com

For those wishing to contribute something, they would ask that donations be made to Planned Parenthood, an organization Tom always felt passionate about supporting or the Mayo Clinic Cancer Center, who helped him win the fight against cancer.

Offer Hugs From Home Condolence for the family of RUSSELL, THOMAS GEORGE