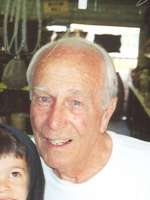 Richard P. “Dick” Ryan, long time resident of Phoenix and Scottsdale businessman passed away on September 12, 2010, after a short illness. Dick was born in Duluth, Minnesota on September 22, 1920. Dick was the son of Edward B. and Rose Fiebiger Ryan. He was preceded in death by his siblings Mary, Helen (Hilger), John, James, Emily and Barbara (Divine). At the age of 3 his parents and 5 of his siblings moved to Phoenix where his father started the Momsen, Dunnegan & Ryan Wholesale Hardware Company. Dick attended Kenilworth Elementary School and Phoenix Union High School. Dick served his country during WWII with the Army’s 361st Infantry where he participated in the U.S. forces initial landing at Anzio, Italy, on June 1, 1944. He completed his formal education at the University of Southern California receiving a Bachelors Degree in Business Administration. After graduating from USC Dick worked for various companies until he co-founded Scottsdale’s Pottery Paradise with Max May in 1950. Pottery Paradise was one of Scottsdale’s “50 Founding Businesses” when the town incorporated in 1951. Pottery Paradise remains at the same location today. Dick was dedicated to the many people he mentored in his life. He was well known for his honesty, integrity and generosity, always offering free bottles of water, candy or ice cream to his customers and dog treats to their dogs. If you didn’t have a dog, he would ask you why not? There were many visitors, when they traveled to Scottsdale that would come by just to say hello to Dick, and have a chat with one of Downtown Scottsdale’s original merchants. Even though his alma mater was USC, he was a loyal Notre Dame “Fighting Irish” football fan to the end.
Friends may visit Friday, September 24, 2010 from 6-8 p.m. at Whitney & Murphy Funeral Home, 4800 East Indian School Road Phoenix, Arizona. A Funeral Mass will be said September 25, 2010, at St. Mary’s Basilica, 231 N. 3rd Street Phoenix, Arizona at 9:30 a.m. In lieu of flowers donations may be made to the Society of St. Vincent de Paul P.O. Box 13600 Phoenix, AZ 85002-3600 or your favorite charity.

Offer Hugs From Home Condolence for the family of RYAN, RICHARD PAUL