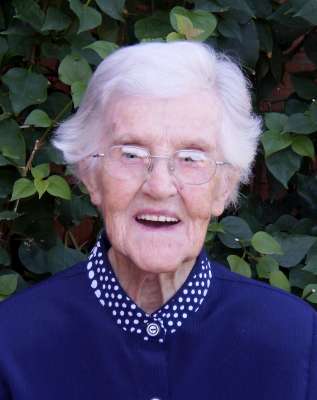 Sister Teresita Ryan (Sinead Ryan) was born in Mitchelstown, County Cork, Ireland on April 24, 1918. She was daughter of William J. Ryan and Julia (O’Donoghue) Ryan. She entered the Novitiate in Loreto Convent, Navan, County Meath, Ireland in 1936, and during her years in Navan, she served as High-school principal, and subsequently, in Mullingar, also Diocese of Meath, she served as Principal of Loreto High-school there. She was an excellent administrator, and with her exceptional musical ability, she brought both of those schools to a high level in choir and musical performance. Sister Teresita held Masters degrees from National University of Ireland with majors in Latin, French and Gaelic and she also held high-proficiency diplomas in music. In 1975 she came to Phoenix to join the community of Loreto Sisters at Ss. Simon and Jude Convent and Catholic School. Her musical talent and expertise and her silver soprano voice were put to use as she taught singing and directed musical performances at the parish school, and, also, for some years, she directed the parish choir. In her retirement, she taught Latin, an elective for 8th grade students at Ss. Simon and Jude School. She also volunteered at St. Joseph’s Hospital, helping with newborn babies and also serving as a minister of prayer and Holy Communion for new moms on 4th floor of the hospital. She clocked up over 1,000 hours of service at St. Joseph’s. For some years, also, she delighted the guests at the St. Vincent de Paul Dining Room with her singing and piano playing. Surely she is now being welcomed to join her beautiful voice with the heavenly choirs to sing God’s praises forever. Sister Teresita was preceded in death by her parents, her brothers: Christopher, Michael, Sean, Bill, and Rev. Fr. James OFM Cap., her sisters: Helen, Sheila – a Presentation Sister, and Mary Celine – also a Loreto Sister. She is survived by her sister-in-law, Norah, and many beloved nieces, nephews and cousins in Ireland who will mourn her loss, as will all her former students, her Loreto Sisters and the priests and parishioners of Ss. Simon and Jude Cathedral. May she live now in the presence of the Lord to Whom she made her commitment in Religious Life 81 years ago. A Visitation will be held from 7:30-9:00 p.m. with a Rosary at 7:45 p.m., on Tuesday, March 14, 2017 at Ss. Simon and Jude Cathedral, 6351 N. 27th Avenue, in Phoenix. Funeral Mass will be held at 10:00 a.m., Wednesday, March 15, 2017 at Ss. Simon and Jude Cathedral. Interment will follow at St. Francis Catholic Cemetery, 2033 N. 48th Street, in Phoenix. In lieu of flowers, donations may be made to the Loreto Sisters’ Retirement Fund, Ss. Simon & Jude Convent, 6351 N. 27th Avenue, Phoenix, Arizona 85017. Arrangements entrusted to Whitney & Murphy Funeral Home.

Offer Hugs From Home Condolence for the family of RYAN, SISTER TERESITA