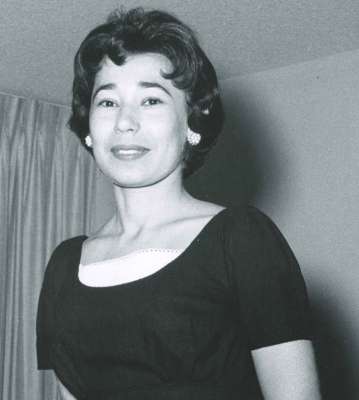 was born in El Paso, Texas to Andres G. Garcia and Inez Munoz Garcia on September 11, 1924 and passed away peacefully in her sleep at her home here in Phoenix on December 31, 2013.

Rommie’s Father passed away shortly after her birth and she and her Mother moved to Phoenix in 1927.  Her Mother Inez was Rommie’s North Star all her life and Rommie adored her Mother.  She graduated from Monroe School and, with honors, from Phoenix Union High School class of 1942.  Rommie also served as class President while attending Phoenix Union.  Shortly after graduating from Phoenix Union she began her career at ADOT in the Motor Vehicle Division.  Over the next 44+ years she became only the second woman to be an Administrative Assistant and next was a promotion to Encroachment Permit Supervisor.  After studies at Phoenix College, where she again graduated with honors, she became one of the first women to be certified as an Engineering Technician for the Arizona Department of Transportation.  Rommie found time to attend ASU and Rio Salado College because if she didn’t know how to do something she would take a class at college or purchase a book on the subject and learn.  She had a lifelong appetite for knowledge.

Rommie was a Certified Master Gardner through the University of Arizona Coop Extension, an accomplished artist where her love of flowers showed in her many beautiful paintings.  She spoke six languages fluently, and was a skillful flamenco dancer; castanets and all.  She had a great sense of humor and was a licensed Ham operator to boot.  She could also prepare a great ham dinner!

As you can see, Rommie was a true Renaissance Woman in every sense of the word, skilled and well-versed in the arts and sciences.  She was smart, strong, fearless and always up for a challenge.  Her love has touched so many lives in such a positive way that our World will be a much lonelier place without her beautiful presence.  Rommie was loved.

Offer Hugs From Home Condolence for the family of SAITO, ROMELIA GARCIA “Rommie”