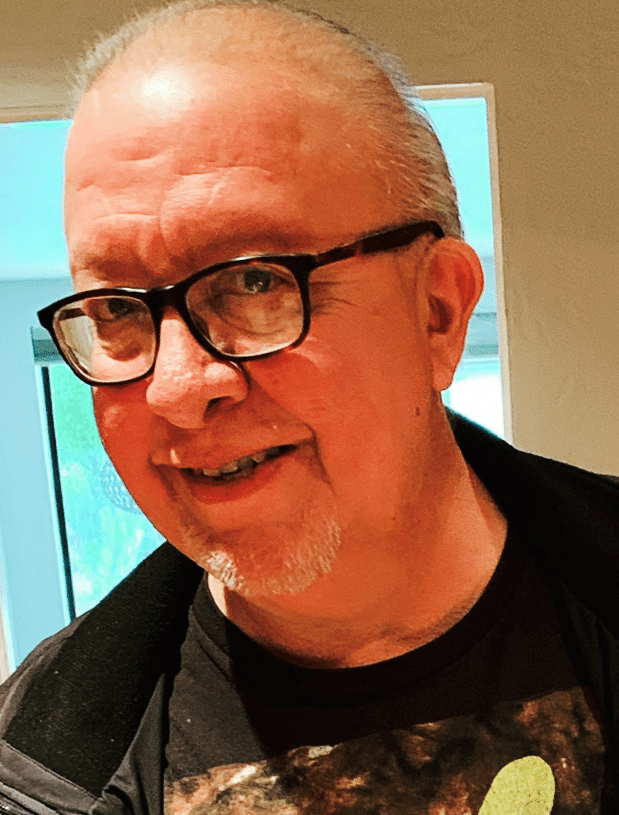 Jose Isaac Salazar, Jr. passed away peacefully in Phoenix, Arizona, on March 1, 2022 after a valiant eight-year battle with cancer.  Isaac, as he was called by the many people who loved him, was known for his unmatched brand of humor, his kindness, and his knack for knowing just the right thing to say and when.

Born in Plainview, Texas, he grew up in Corpus Christi after traveling the country with his family working in produce fields. Isaac followed in his father’s footsteps becoming a skilled carpenter. Through the process of being featured in the local newspaper for his brilliant woodwork, Isaac discovered journalism. He landed a job as a videographer for a lawyer who fought the Ford Motor Company, and won, in a fuel tank-related lawsuit. During that landmark case, Isaac developed his life-long passion for capturing images to tell stories.

Isaac went to work in television news and served at each of the three TV stations in Corpus Christi before moving to Arizona in the late ’80s. Isaac worked for more than a decade at KVOA-TV, the NBC affiliate in Tucson, where he blossomed into a multi-Emmy award-winning photojournalist and Assignment Manager. He was also honored with an Edward R. Murrow award and many Associated Press awards. Isaac had a reputation for listening to people and relaying stories, as well as mentoring many journalists. He traveled throughout the country, and internationally to Mexico and Italy, for television news assignments and made friends everywhere he went. He alone created a dynamic promo video for the University of Arizona that aired on national television during athletic events. As an acclaimed photojournalist, Isaac accepted his last job at KNXV-TV in Phoenix, the nation’s fifth largest television news market. He went on to cover the Academy Awards in California for the ABC affiliate, during which he wore a tuxedo and called his sister to tell her “George Clooney smelled amazing.”

It was here in Phoenix Isaac met the love of his life, Reyna Zamudio, a business owner and native of Mexico, who loved Isaac with all her heart. They married in 2017 and honeymooned in Sedona. They loved to dance everywhere they went. Isaac made breakfast for Reyna and packed lunches for her to take to work every morning. Their love is memorialized with wedding photos and a special wooden bench Isaac carved to commemorate his love for Reyna.

Together they faced Isaac’s thymus cancer diagnosis in 2014. He had open heart surgery in 2015 and underwent countless treatments. He “rang the bell” four times over the years exceeding all medical expectations. He encouraged fellow patients with inspiring words and handed out “Don’t Tell Me the Odds” Star Wars cards at the MD Anderson Cancer Center in Gilbert throughout the month of February, a short time before his passing.

Isaac loved everything “Star Wars.” He could quote any of the movies, masterfully handle a light saber and was proud of his extensive collection of related memorabilia. He wore Star Wars shirts most every day and to each of his treatments and was often inspired by the trilogy’s theme song his radiologists would play especially for him.

Isaac loved a good glass of Macallan scotch, but he loved his family and friends more. He adored his parents and sister, visiting them often, even during the early days of the pandemic. It was said “if you knew Isaac, you were a lucky member of a large fraternity.” He’s been called “an original,” and “an amazing human being,” which he was. His friends and colleagues tell countless Isaac stories of how he supported them, counseled them, and made them laugh. He was a dear, sweet, and funny friend who is missed by all who knew him.

He passed at Hospice of the Valley, in the arms of his wife Reyna and only sibling Diana and, appropriately, he was wearing a Star Wars shirt.

After enduring a years’ long fight, in the end, he declined rapidly and was unable to follow through with his intention to party with friends and family in Tucson where he could hear for himself what people would say about him and the impact he had on those he loved. Safe to say he would have been showered with love, funny stories, and much gratitude for the joy he brought to so many. As Isaac loved to say, “always remember, never forget.”

Isaac is survived by his wife Reyna, her daughter Diana Flores Zamudio and son Daniel Flores Zamudio, as well as his mother Maria Berta Salazar and father Jose Isaac Salazar, Sr. and sister Diana Salazar Vargas (Ino Vargas) and many nieces and nephews.

Please join us in honoring Isaac with your stories and photos on Saturday, March 12, 2022 from 1 p.m. – 3 p.m. at Whitney & Murphy Funeral Home, 4800 E. Indian School Rd., Phoenix.  The Celebration of Life will be live streamed at https://www.facebook.com/WhitneyMurphyFH/live/

Offer Hugs From Home Condolence for the family of SALAZAR JR., JOSE ISAAC