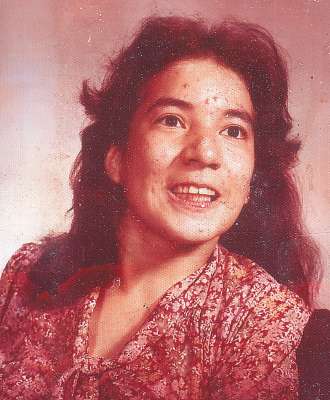 Dolores T. Salazar, 58, passed on October 21, 2016.  Dolores was born to the late Robert and Sophie Salazar on October 18, 1958.  Dolores is survived by her 3 sons Zakariyz, Monte and Corey (Jazmine).  She’s also survived by her 3 grandchildren, Emily, Aidin, Mallinani and her siblings Maria, Grace, Lisa, Virgie, Paul, Danny, Jessie and Yolanda.  Dolores was a beloved mother, grandmother, sister, aunt and friend.  Dolores was a strong willed person and did not let her disabilities lead her life.  Dolores was a great inspiration to many.  The love she had for her sons and grandchildren was unconditional and beyond words could ever express.  Dolores will be greatly missed by many.  Visitation will be from 10:00-11:00am with a Funeral Service at 11:00am, Monday, October 31, 2016 at Whitney & Murphy Funeral home, Phoenix.  Interment will be at 1:00pm, Monday at the National Memorial Cemetery of Arizona, 23029 N. Cave Creek Road, Phoenix.

Offer Hugs From Home Condolence for the family of SALAZAR,DOLORES