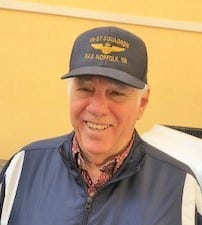 Joseph “Joe” Salerno passed away on Saturday, November 12, 2022, in Phoenix Arizona. He was surrounded by his devoted family and wife, Louise, who was the love of his life for over 50 Years. He was born in the Bronx, New York on September 16, 1938 and is predeceased by his parents, Michelina (Russo), Angelo Salerno and brother Carmine Salerno.

After graduating from High School, Joe enlisted into the US Navy on September 21, 1955. He was proud of his service and loved his country. He supported our Nation’s Veterans and active service members throughout his life in both words and deeds. He was so proud that his Great Granddaughter, Avalee’s first loved song was the National Anthem.

After serving his Country, Joe worked several jobs, one of which was for the local newspaper, The Poughkeepsie Journal. However, his sites were set on obtaining a job at IBM, and at least once a week he would stop at IBM and inquire on open Job positions. His persistence prevailed Joe obtained a position at IBM, in Poughkeepsie, New York. His career at IBM, lasted over 30 years, where he not only had great success, but found true and lasting friendships. He retired from IBM in 1995.

Following retirement, Joe and Louise enjoyed spending the winters in Arizona. Eventually, Arizona became their home, where Joe cherished spending time with his loved ones on the family horse ranch. He was known to the horses as the “Treat Man”. When the horses would see him walking down to the barn you could hear them whinnying for miles. He was an avid, sports fan, loyal to the Yankees, Giants, and never missing an Army-Navy football game. He was also known as a James Bond 007 Super Fan and would enjoy an occasional Bond Movie marathon.

Joe’s amazing character, compassion, humor and devotion made him a pillar among his family and many lifelong friends. He loved family gatherings, Holidays, and home cooked Italian food. He was always one to encourage a creative spark in those close to him, he would, on occasion, also enjoy burnt pancakes made by his kids and niece/daughter Jonna Spilbor, with the same enthusiasm as if it was prepared by a world class chef. He was proud of his childrens’ and grandchildrens’ accomplishments and would talk about his family to everyone he encountered.

He will be honored on Tuesday, November 22, 2022 at 1:00 PM, at the National Memorial Cemetery of Arizona/Arizona Veterans Memorial Cemetery, located at 23029 N. Cave Creek Road, Phoenix, Arizona. The family has requested in lieu of flowers that you make a donation toward your favorite charity.

Offer Hugs From Home Condolence for the family of SALERNO, JOSEPH “JOE”