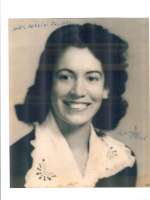 Natalia “Nellie” Salinas, 87, went home to be with our Lord on Tuesday, January 29, 2013, surrounded by her family.  Natalia was born in Tucson, Arizona on September 12, 1925 to Jesus Antonio and Herminia Rivera.  She was raised in Phoenix where she married Ralph.  She was a stay-at-home mom and housewife in her early years but later worked for a children’s day care center which led to care giving for children out of her home.  Nellie’s day care included a number of her grandchildren, great-grandchildren, relatives, neighbors and friends.  She was well known for her cooking and hospitality.  Natalia was preceded in death by her loving husband Ralph Salinas, her father, mother and her five brothers Nacho, Tony, Oscar, Neto and Arturo.  She is survived by her loving son, Ralph (Carmen), four daughters, Ida (Richard Pool), Alice Ruiz (Nick), Sandra Rodes (Bill), and Patsy Zamora (Steve),  her son-in-law Bobby Chavez, 9 grandchildren and 12 great grandchildren as well as  many cherished nieces, nephews and friends.   Visitation will be from 9:30 a.m. – 10:00 a.m. with a Rosary at 10:00 a.m. and Funeral Mass at 11:00 a.m., Tuesday, February 5, 2013 at Immaculate Heart Catholic Church, 909 E. Washington Street in Phoenix.   Interment will follow at St. Francis Catholic Cemetery, 2033 N. 48th Street, Phoenix, AZ.  The family is also grateful for the loving and compassionate care provided by Arizona Grand Assisted Living, Premier Hospice and Right at Home.

Offer Hugs From Home Condolence for the family of SALINAS, NATALIA