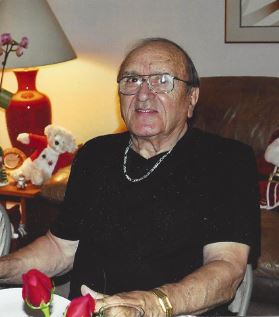 Carmine “Mickey” Salvatore was born in Bronx, New York in 1926, to John and Marie (Tuccilo) Salvatore. Mickey lived his life in New York, California, and Arizona. He had a lifelong love of music, which began as a teen in Hollywood, California and continued for decades. Mickey served in the Army in World War II and received many medals, including the Bronze Star. During his time in the Army, he was wounded and completed his military career by entertaining the troops. When he returned to the states, he married his first wife and had four children. He remained in the music industry and sang and played drums in many bands, including his own. After moving to Arizona in the 70’s, he met and married the love of his life Virginia. He opened “Carmine’s Pizza” and he and Virginia worked together and eventually opened two additional locations. His love of music was never far from his thoughts and he continued to sing and play until he passed.

He is survived by his wife of many years, Virginia, two daughters, Marie Crai (Richard), Carol Batawalla (Derrick), and stepdaughter, Marilyn Wylie (George). He has 9 grandchildren, 8 great-grandchildren, 2 great-great grandchildren, and many nieces and nephews.

All of the services for Mickey will be held at Whitney & Murphy Funeral Home, 4800 E. Indian School Rd., Phoenix, on Saturday, December 21, 2019, beginning with Visitation at 9:00AM and Funeral Service at 10:30AM. Interment will follow at St. Francis Catholic Cemetery.
Family suggest contributions in Mickey’s honor be made to
Hospice of the Valley, 1510 E. Flower St., Phoenix AZ, 85014.
Condolences may be expressed at www.whitneymurphyfuneralhome.com

Offer Hugs From Home Condolence for the family of SALVATORE, CARMINE MICHAEL