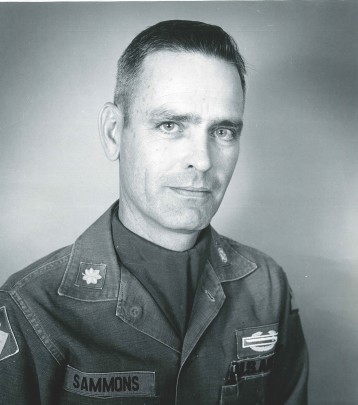 A hero to his family and the men who served with him, Anthony J. Sammons, Jr., peacefully entered the Kingdom of Heaven on Tuesday, October 27, 2015. Tony was a 5th generation Texan, born in Poteet, May 20, 1928. He was raised by his dear Grandma Mae in that small Texas town that he remembered fondly. He studied at Texas A&M prior to joining the Marine Corps. His military path switched slightly prior to Korea, where he was assigned to a United States Army Infantry troop and earned a Bronze Star. A career military officer, Tony spent 32 years in the US Army and was a decorated veteran. He retired as a Colonel and was inducted into the US Army OCS Hall of Fame for his civilian and military service in 2002. He was a United States Army War College graduate and completed multiple international tours of duty, as well as national assignments at the Pentagon and various military bases. It was a family joke that none of his daughters were born in the same state due to his numerous postings early in his career. Those who knew him were lucky. He was highly intelligent and had a sharp wit, but could also bring you peace with his Southern drawl and a full body hug. A role model for many, he led by example with courage, integrity, and strength. In his later years, he thoroughly enjoyed his role as a grandfather. He attended more recitals, graduations, and games to count, and he was always available to lend advice and share a story. Loyal, honorable, and faith-filled, Tony exemplified the highest qualities of what a man should be. Nobody questioned how much Tony loved his wife of nearly 62 years, Anne – by whom he is survived. Their union began with a helping hand from the military, as she was a performer for the USO. They met in Seattle and were married three weeks after his return from Korea. A large family resulted with five daughters: Patty (Solomon), Mary (Hallahan), Kitty (Broderick), Laura (Jordan), and Julie (Youngblood). He cherished his role as devoted father to these “five queens.” He is also survived and missed by 10 grandchildren and six great-grandchildren. His “Grandpa-isms”, memories, legacy, and love will live on. Tony’s life will honored at a prayer service on Thursday, October 29 at Whitney & Murphy Funeral Home (4800 E Indian School Rd, Phoenix, AZ) from 4-6 PM. With family and friends, his life also will be celebrated at a funeral mass on Friday, October 30 at St. Francis Xavier Catholic Church at 2 PM (4715 N Central Ave, Phoenix, AZ). In recognition of Tony’s military service, he will be interred, with military protocols, Monday, November 2, 10:30 a.m. at Veteran’s Cemetery. When I stand before God at the end of my life, I would hope that I would not have a single bit of talent left, and could say, “I used everything you gave me.”  Erma Bombeck. In lieu of flowers, please consider making a donation to an organization near and dear to Tony’s heart, Wounded Warrior Project.