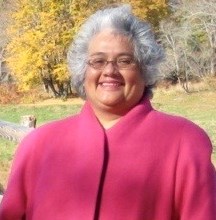 Olga passed away to heaven on Saturday, January 6, 2018, at the young age of 55 years. She lived a full life always surrounded by family and tons of friends. She was known for her smile and gregarious nature. No one was a stranger to her, as she had a disarming demeanor. Her friends all came to know her by her smile, humor and contagious laughter. Born in San Antonio, Texas, Olga moved to Phoenix during her freshman year in high school. She attended East High School where she quickly made lifelong friends. Not long after high school, Olga started working at U-Haul in downtown Phoenix, where she made a positive impact on those around her. She loved her job and the U-Box team co-workers so much that she worked for U-Haul for nearly 33 years. Olga considered her co-workers a large part of her family. When Olga was not at work, her other two passions were church and sports. She found two very close families in each of those worlds. Olga was very close to her church and friends at Unity of Phoenix Spiritual Center. She attended and volunteered regularly. Her other family was at the local neighborhood pizzeria, Red Devil Italian Restaurant, where she spent a lot of her free time with the “locals” at the bar. Although Olga was a non-drinker and a non-smoker, she enjoyed the atmosphere of watching any sports game on the bar’s televisions and the banter that went along with it. Olga will be sorely missed in this world. She is survived by her parents, Santo & Estella Sanchez, her two brothers, niece, nephews and grand-nephews, each very much a part of her life. A Visitation will be held at Whitney & Murphy Funeral Home, 4800 E. Indian School Rd., Phoenix on Thursday, January 11, 2018 from 5:00 P.M. to 8:00 P.M. Funeral mass will be held at Unity of Phoenix, 1500 E. Greenway Pkwy, Phoenix on Saturday, Jan 13th, at 3:00 P.M.

Offer Hugs From Home Condolence for the family of SANCHEZ, OLGA D.