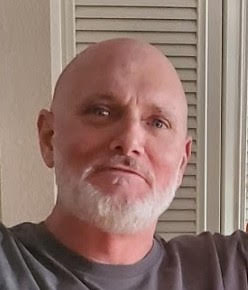 Robert “Rob” Sanders was born in Chicago, Illinois, to Ronald W. and Barbara Jean Sanders in 1967. He graduated from Gerard High School in Phoenix, Arizona, and served his country with honor in the United States Navy. Rob worked as a stockbroker and advertising director for a San Diego jazz radio station. He moved back to Phoenix to care for his ailing brother Richard until his death, and then his mother Barbara until her death. At the time of Rob’s passing, he was his father’s caretaker.

Rob’s devotion to his family stemmed from his unwavering compassion and love. He stepped up to assume the role of grandfather for his brother Rick’s grandsons and granddaughter. He wrote poetic, heartfelt notes to his family and friends and donated hours of time to the humane society. Dogs and the U.S. Navy were his passions. He had a remarkable ability to communicate with dogs and loved them dearly.

Rob enjoyed jazz music, films and watching Dustin and Caden play sports. He valued each and every moment spent with members of his family most of all. He loved traveling to Oregon to be with his older brother Randy in the woods and enjoyed the company of his niece’s husband Mark, who he referred to as “My brother from another mother.”

Rob is survived by his father Ronald, his older brother Randy, sister-in-law Marci, his niece Melissa and her husband, Mark, his great-nephews Mark Jr., Jeremy, Dustin, Caden, his great-niece Selena, and his beloved Jack-Rat Terrier Milo.

Instead of flowers, donations may be sent to the Arizona Humane Society. Condolences and Hugs from Home may be expressed at www.whitneymurphyfuneralhome.com.

Offer Hugs From Home Condolence for the family of SANDERS, ROBERT WILLIAM