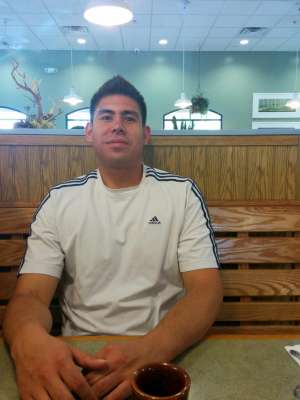 25 of Phoenix, AZ went to be with our Lord on December 26, 2014. He was born on March 9, 1989 in Mesa, AZ, the son of Mary Dower and Dick Santistevan. Daniel completed an A.A. degree from Mesa Community College and was working for Amazon.com.   He attended Seton Catholic H.S. and Mt. Pointe H.S where he graduated in 2007. Daniel earned his rank of Eagle Scout at the age of 15 and was a member of Troop 474 in Tempe, AZ.   He achieved his Eagle rank upon completion of a project that included paint and renovate the interior courtyard of St. Agnes Elementary School in central Phoenix. The project involved 308 hours of service and 45 volunteers. Daniel played on the freshman basketball team for Seton Catholic H.S. and basketball and volleyball at Mt Pointe H.S. Daniel loved music and was chosen for the advanced jazz band at Kyrene Middle School where he won outstanding solo award for the Bari-Sax. Daniel was awarded the President’s Education Award for Educational Excellence for Outstanding Academics for maintaining a 4.0 GPA. During his elementary years at Kyrene de Los Ninos in Tempe he was the top ranked player on the chess team. Daniel was preceded in death by his paternal grandparents, Fermin and Della Santistevan, paternal Uncles Armando Santistevan Arvada, CO and Jake Santistevan Canyon City, CO, Paternal Aunt Geraldine and Uncle Cary Spangler, Romeo, CO, and Paternal Aunt Brandi Elliot, Bimigi, MN. Daniel is survived by his parents Mary Dower of Tempe and Dick Santistevan of Phoenix, his half siblings Gabriel and Belen Santistevan of Phoenix. Maternal grandparents John and Mieko Dower of Freeport, IL, God-parents Jeff and Doreen Dower of Middleton, WI, and many uncles, aunts and cousins. Daniel’s death has left us broken hearted.  He is loved deeply and missed terribly. Visitation will be held Saturday, January 3, 2015  at St. Agnes Church 1954 N. 24th Street Phoenix, AZ from 9am-10am with Rosary at 10am. Funeral Mass will be held at 10:30am with a reception following in the church hall. In lieu of flowers, a memorial fund has been established at Chase Bank in his parent’s names. Arrangements entrusted to Whitney & Murphy Funeral Home.

Offer Hugs From Home Condolence for the family of SANTISTEVEN, DANIEL LEE