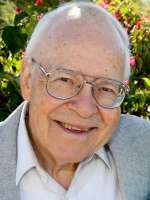 November 17, 1925–September 5, 2011. On September 5, 2011, we lost the beloved patriarch of our family: William C. Savage. A constant source of strength, a ready fountain of joy, an unconditional bulwark of support – his loss will be felt acutely. But we could not wish him back, no matter how heavy our hearts, because he has been called to the Savior he loved with all his being, the Lord Jesus Christ. Born November 17, 1925, Bill was a standout teen golfer in Southern California, winning the state amateur more than once. After serving his country in the Navy during World War II, Bill played golf on Stanford University’s national championship team in 1948. He then joined his father selling cars at Savage-Haldeman in Hollywood, building the largest Pontiac dealership in the world. Bill finished his professional career as a Land Developer in north San Diego County, raising his family in Rancho Santa Fe. His greatest love was bringing people to new life in Jesus Christ, frequently spending more time in Christian ministry than in business. For years, Bill, and his wife, Betty, opened their home on Saturday nights to hundreds of young people, junior-highers to collegians, teaching them the magnificent truths of the Bible, with many coming to a living faith in Jesus Christ. Bill served on the boards of Forest Home Christian Conference Center and Emmanuel Faith Community Church. His motto was: ‘All for Jesus – till the whole world hears.’ Less than four months ago, he was predeceased by Betty, his wife of nearly sixty years. He is survived by a son, Tim, a daughter, Debbie Smith, a daughter-in-law Lesli, and a son-in-law Herbert Smith, as well as by six grandchildren: Matthew (whom he taught golf and who won a team national championship at Stanford [2007]), Jonathan, Caleb, Nathan, Anna, and Christa. A Memorial Service is scheduled for Sunday morning November 27, 2011 at Camelback Bible Church, 3900 E. Stanford Drive, Paradise Valley, AZ 85253. In lieu of flowers, memorial gifts may be directed to Camelback Bible Church’s ‘Hospitality Center Fund.’

Offer Hugs From Home Condolence for the family of SAVAGE, WILLIAM C. “Bill”