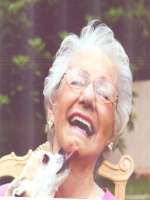 Angelica Kimer Scarla, 87, passed peacefully in her sleep on Monday, October 22, 2012. Angie was born in Athens, Greece on October 2, 1925. She moved with her parents, both Asia Minor Greeks, to the USA when she was just 2 months of age. She grew up in Washington, DC, attending public school followed by Greek school each day, as well. After high school graduation in 1944 Angie worked at the US Department of Agriculture. During this period she met and married George Aris Scarla in Washington, DC on December 7, 1947. Angie was quick to smile and to laugh. She was thrilled to be with family and friends. Her Chihuahua, Ginger, was an ever-present and loving side-kick. Taught by her mother, Angie enjoyed and excelled in the preparation of traditional Greek foods, especially desserts. She delighted in Greek dancing. Her roses were a passion, which continued to bring her daily joy. They are yet blooming in her front yard today.
She is predeceased by her husband George Aris Scarla (Gyorgos Aristeidis Scarlatenes), parents: Dennis John Kimer (Dionysus Iannis Kimerzoglou) and Ethyl Kimer (Evthalia Iliades), and brother John Dennis Kimer. Surviving are her
children: Dennis George Scarla (Vallejo, California), Aris George Scarla (Mesa, Arizona), and Ann Scarla Hughes (Medina, Ohio), grandchildren: Angela Christine Hughes (Scottsdale, Arizona), Kalía Holderman Scarla (Arcata, California), Michael Thornton Hughes (Ohio), Kellen Holderman Scarla (Vallejo, California), George Aris Scarla (Mesa, Arizona), Nicholas Dee Scarla (Mesa, AZ), and Stephanie Ann Scarla (Mesa, Arizona), and niece Kiki Wilkinson (Kimer), Port Tobacco, Maryland. Please join her family in a celebration of the long life of a delightful wife, mother, aunt, cousin, yiayia, and friend. Visitation will be from 3:00-4:00pm with a Funeral Service at 4:00pm, Saturday, October 27th at Whitney & Murphy Funeral Home, 4800 E. Indian School Road, Phoenix. Interment will be private. It was Angie’s desire to continue living in her home of 53 years, and her family thanks all who helped during her illness. Especially noted is the invaluable contribution made by Banner Hospice.
Please make donations in Angie’s honor to Banner Hospice.
“We become immortal through the memory of others whose lives we have touched.”

Offer Hugs From Home Condolence for the family of SCARLA, ANGELICA KIMER