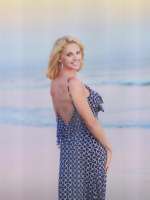 Brandi Renee Schamadan left to be with the Lord on March 22, 2013 at the young age of 41.  She is survived by her husband Mike, daughter Lexi (12), son Blu (9), parents Patrick and Sarah Grimes, sister Heidi and a very large extended family with many aunts, uncles and cousins.

Brandi grew up in Glendale, AZ and graduated from Cactus High School and Grand Canyon University where she was a standout volleyball player.  After college Brandi was hired by the Phoenix Fire Department and became a Firefighter/Paramedic.  She rode trucks all over the city until finally settling at Engine 23 “B” shift.  She met her husband at Station 1 and they were married soon after.  Brandi left the job after 10 years to stay home and raise her 2 beautiful children.  Brandi loved everything about being a mother.  She took great joy in attending anything her children were involved in.  She loved to play with them on the beach in Coronado and in the mountains of Colorado.

Brandi loved the Lord and spent a lot of time helping others to know Him.  She was a woman of incredible faith that inspired so many people.  Brandi’s fight with cancer was long and difficult, but she did it with such grace and humility.  She will be deeply missed by so many, but she is now home in the arms of her Lord.

Offer Hugs From Home Condolence for the family of SCHAMADAN, BRANDI RENEE