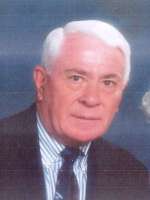 It is with great sadness that we announce the passing of Jim Scherwenka on September 21, 2012, a man who loved to laugh and make others laugh with him. Jim was known for his wit and sense of fun, he was always the life of the party. Jim was born in Milwaukee, WI on February 11, 1932, the son of Joseph M. and Catherine Campbell Scherwenka. He was a graduate of Marquette University and a member of Delta Sigma Pi fraternity. Jim also served in the Army Signal Corps. Jim married Patricia Spilman in 1955. Jim, Pat and their baby daughter Sandy moved to Phoenix, AZ in 1959. Jim spent his working career in the Insurance industry. Jim is survived by his wife Pat, his son Scott, his daughter Sandy (Scott Owens), four grandchildren, Mariah, Corbin, Cory and Eliah, former daughter-in-law Corrine Rodriguez, brother Tom (Kandy), cousins Bill Scherwenka (Lori), Margaret Hitt (Dick), sisters-in-law Margaret Schwabe (the late Richard DVM) and Van Murphy (Tom), many nieces and nephews and many dear friends in Phoenix and Wisconsin. Some of Jim’s most cherished memories were with family and friends in Puerto Penasco, Mexico where he was fondly known as Jaime. If you knew Jim Scherwenka, you loved him. A special thank you to Margaret Schwabe, R.N., Pat’s sister, who came from Iowa to help care for Jim and also to Hospice of the Valley for their special help. A Visitation will be held at Whitney & Murphy Funeral Home, 4800 E. Indian School Rd., Phoenix on Sunday, September 30, 2012 from 5:00 – 7:00 P.M. with a Rosary at 6:00 P.M. A Memorial Mass will be held at St. Francis Xavier Catholic Church, 4715 N. Central Ave., Phoenix on Monday, October 1, 2012 at 4:00 P.M. Interment will be private and at a later date. In lieu of flowers, donations can be made in Jim’s name to Hospice of the Valley, 1510 E. Flower St., Phoenix, AZ 85014.

Offer Hugs From Home Condolence for the family of SCHERWENKA, JAMES JOSEPH