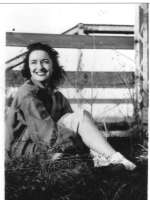 Catherine “Kate” Scheurich passed away peacefully on Good Friday, April 22, 2011. Kate was born on September 5, 1920 in Champaign, Illinois to Peter and Helen (Manning) Scheurich. Kate was an accomplished pianist. While at the University of Illinois in Champaign studying journalism, she played piano and sang in a swing band. After college, she embarked on a long career in radio broadcasting. At the radio station WITY in Danville, Illinois, near the Indiana border, she was known as the “Voice of Illiana.” In 1960, Kate moved her family to Phoenix, Arizona, where she worked at KTAR radio for almost 20 years. Her daily program, “Katie Sherrick’s Woman’s World,” entertained many with celebrity interviews, recipes and her organ performances. Kate was a strong and loving single mother who somehow met every challenge her son, Mike, could throw at her. She was also a loving and generous grandmother. For the past 10 years, Kate was a very happy resident of the Beatitudes Campus. She was cared for and comforted in her final days by the staff of the Beatitudes’ Vermilion Cliffs Neighborhood and Hospice of the Valley. She is survived by her son, Michael Scheurich, and his wife, Pat, and their four children: Michelle (Scheurich) Dolar, Samuel, Charles and William, and Michelle’s husband, Nathanael Dolar. A memorial service will be held at the Luther Life Center at the Beatitudes Campus, 1610 West Glendale Avenue, Phoenix, Arizona, 85021 on Saturday, May 21st at 11 a.m. with a reception to follow at the Life Center. In lieu of flowers, remembrances in Kate’s name may be made to the Beatitudes Campus Foundation at the same address.

Offer Hugs From Home Condolence for the family of SCHEURICH, CATHERINE