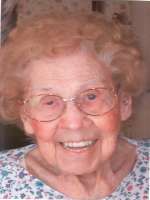 Thelma passed away on October 16, 2012 at the age of 100. She was born in Lima, Ohio to William and Anna Ducey on February 9, 1912. She is preceded in death by her only sibling, Mary Ellen Rechtin. She spent her early years in Cincinnati, Ohio until 1946 when she married George Schoeny and they moved to Phoenix, Arizona. George preceded her in death in 1991. She is survived by her two daughters, Sheila Otter (Mike) and Debbie Schoeny, grandchildren, Becky Otter Shoemaker and Brian Otter, 3 great grandsons, and good friend, Ron Davis. A Funeral Mass will be held Tuesday, October 23, 2012 at 10 am at Huger Mercy Living Center, 2345 W. Orangewood Ave., Phoenix, AZ. Interment to follow at St. Francis Cemetery. In lieu of flowers, donations can be made in her honor to Hospice of the Valley or your favorite charity. Arrangements entrusted to Whitney & Murphy Funeral Home.

Offer Hugs From Home Condolence for the family of SCHOENY, THELMA DUCEY