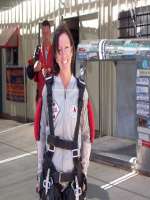 born in Durango, Colorado, and resident of Phoenix, passed away March 9, 2011. Peacefully surrounded by her loving family, she departed this world after a six year battle with cancer. Liz is survived by her two daughters, Emily Rose, Anna Katherine and son Daniel Jay; husband Michael Jay Schrader; mother, Eileen Rose Brown; brothers, Charles Percy Brown, Patrick Earl Brown and David Edward Brown; family and friends. Preceded in death by her father, John David Brown. Elizabeth was raised in both Durango, Colorado where she was Durango Junior Miss 1981 and Boulder City, Nevada and attended Fort Lewis College and earned her graduate degree in accounting at Arizona State University and was a member of Delta Delta Delta Sorority. Elizabeth went on to earn her Masters Degree at Pepperdine University with the Presidential/Key executive program. After her graduation from ASU, Liz was hired by Arthur Andersen as a strategic planning and operational improvement consultant. Elizabeth was quickly hired by United Drugs in 1995. She has served as the Vice President of Operations and Finance and, most recently, President throughout her fifteen year career. Elizabeth served on the Susan G. Komen and John C. Lincoln board of directors. Elizabeth was involved in many volunteer activities with her family. Liz was always active competing in marathons and hiking 14k mountain tops in Colorado. Above all, Elizabeth’s true devotion was to her family. She married Michael of Del Norte, Colorado and enjoyed traveling to Europe, Mexico, Alaska and numerous United States cities. Her favorite memories were always with her family camping or enjoying their cabin at Electra Lake, Colorado. Never to complain or have self-pity Elizabeth lived her life with abandon and had the vision to experience life to the fullest with her family. Respected and appreciated by her colleagues at United Drugs; active in her faith community at Saint Francis Xavier Elizabeth celebrated life. Liz involved her entire family in numerous charities including building homes in Mexico and the Navajo Reservations, Andre House, fundraisers for charity races, adopting families for Christmas, St. Mary’s Food Bank, and adopted five dogs at the Francis Festival. Visitation will be from 2:00-4:00pm, with a Rosary at 3:30pm Sunday, March 13 at the Franciscan Renewal Center. Funeral Service will be at 10:00am, Monday, March 14, at Franciscan Renewal Center, 5802 E. Lincoln Drive, Scottsdale, AZ. Interment will take place at 10:00am, Tuesday, March 15, at St. Francis Catholic Cemetery, 2033 N. 48th Street.

Offer Hugs From Home Condolence for the family of SCHRADER, ELIZABETH ANN (BROWN)